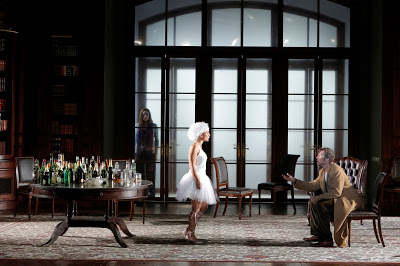 
Don Giovanni is one of the most popular operas in the repertoire and everyone knows something about the fantastic womanizer. Russian director Dmitri Tcherniakov will wipe out all your notions about the legendary seducer of Mozart’s opera. Tcherniakov gives a brilliantly original interpretation  of the opera and of the myth.


The Aix-en-Provence Festival produced Tcherniakov’s vision of the opera in 2010 and the production has been seen in Moscow and Madrid. It will eventually be shown in Toronto. For those seeing this production for the first time some factual adjustments are necessary.


We know that Don Giovanni seduces Donna Anna, the daughter of the Commendatore. She comes out screaming, her father challenges Don Giovanni and is killed by him. Her fiancée Don Ottavio comes on the scene and promises vengeance against the seducer.


Don Giovanni escapes with his servant Leporello but soon runs into Donna Elvira, a noblewoman that  he once seduced and abandoned. She is a woman on a mission to expose his crimes to the world.


That is what Mozart and his librettist Lorenzo da Ponte gave us. According to Tcherniakov, Donna Elvira is Don Giovanni’s wife and the cousin of Donna Anna. Zerlina, the peasant girl that is his next target, is the daughter of Donna Anna by a previous marriage and Leporello is a relative of the Commendatore. In other words this Don Giovanni is a family drama and all of it takes place in the Commendatore’s book-lined and beautifully paneled dining room.


Tcherniakov uses a number of devices to achieve the transformation including inserting time delays in scenes that are continuous in the opera. When Don Giovanni “kills” the Commendatore (he really dies after accidentally hitting his head against a bookcase and perhaps having a heart attack) in Mozart’s version Don Giovanni runs off. In the Tcherniakov version as a guest of the house and the husband of Donna Elvira, he cannot very well run away and he does not. The curtain drops and a few days later, the scene continues without any problem in the plot as laid out by Da Ponte.


Zerlina is getting married in the Commendatore’s house because she is his granddaughter and not some country girl. This intricate conversion is carried out throughout the libretto and the result is an utterly fascinating and convincing transformation subject to some twists that do stretch our credulity.


But that is not the most interesting aspect of the production. Tcherniakov’s view of Don Giovanni is so complexly different from what we expect or think we know about the character that we are left almost aghast.


This Don Giovanni is not the ruthless and selfish lecher who runs off from Donna Anna, kills her father and in short shrift runs into Donna Elvira, one of his victims and then tries to seduce a country girl on her wedding day.


Tcherniakov’s Don Giovanni is old, tired, all passion spent, and a distant memory of the mythical character. He is not interested in seducing anyone. His hair is rumpled, he is unshaven and his clothes look like they have been slept in for weeks. In short, he is a pathetic figure.


Donna Anna tried to seduce him and not the other way around. She is so desperate for sexual satisfaction, that she sprawls out on the stage looking for sex but neither Don Giovanni nor her dolt of a fiancé are prepared to fulfill her. If Don Giovanni says some words that sound as if he is trying to seduce Zerlina, his actions tell us that he is not interested at all. In fact he does nothing.


That is the vision and interpretation that Dmitri Tcherniakov brings to this opera and I consider it original, brilliant and simply awesome.


The production boasts a fine cast of singers/actors to bring out convincing portrayals of Mozart’s people as seen by Tcherniakov. American baritone Rod Gilfry is the exhausted, stumbling Don Giovanni who lives and often sings mechanically. That is not a criticism but a compliment. His voice carries the notes masterfully and displays occasional flashes but all is done in character. It is a superb performance.


Swedish soprano Maris Bengtsson is the sexy and sex-starved Donna Anna with a luscious voice that suits her character. Her cousin Donna Elvira is in the hands of Kristine Opolais and she is angry, frumpy and sexless. She can express her displeasure well enough but one look at her and you say no wonder Don Giovanni left her. Well done by Opolais.


American bass-baritone Kyle Ketelsen is a devil-may-care Leporello, with his mop of hair and irreverent attitude. Ketelsen has a marvelous voice and gave an excellent performance.


Lithuanian bass-baritone Kostas Smoriginas gave us a city tough-guy Masetto instead of a country oaf. Well done vocally and well-acted. American soprano Joelle Harvey gave us a sassy Zerlina, smart and carefree who goes after Don Giovanni and can wrap Masetto around her little finger. Very well done.


American tenor Paul Groves was a square-jawed Don Ottavio, well-meaning but ineffectual. He can sing well (Groves, that is) but he cannot even give minimal sexual satisfaction to Donna Anna (as Don Ottavio, that is).


Conductor Marc Minkowski conducted the London Symphony Orchestra with deliberation and precision matching the interpretation of the opera.

Don Giovanni by W. A. Mozart opened on July 5 and be performed a total of ten times until July 23, 2013 at the Théâtre de l'Archevêché, Aix-en-Provence, France. http://festival-aix.com/