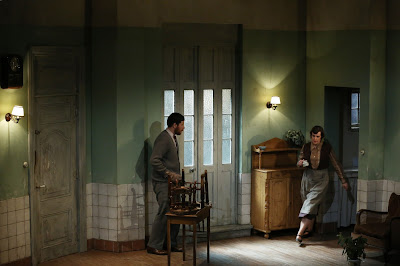 
For its 65th season, the Aix-en-Provence Festival commissioned a new opera that had its premiere at the outdoor theatre of the Domaine du Grand Saint-Jean in the countryside of Provence. The House Taken Over is a fascinating piece that has an equally fascinating provenance. The opera is composed by Vasco Mendonça on a text by Sam Holcroft.


The House has only two characters, Hector (Oliver Dunn) and his sister Rosa (Kitty Whately) who live in a large family house in Argentina in the 1940s. Although they have names, they are referred to as Brother and Sister and they live according to well-set routines that have become ritualistic. They have breakfast, clean the house, open the curtains, cover the family portrait to protect it from the sunlight as if they were almost automatons. Sister is what one would have described as an old maid at one time. She is dressed very conservatively and when not in view of her brother she knits shawls and affectionately embraces a doll.


The routine of the siblings is broken by what is announced in the title of the opera. They hear noises and the house is slowly taken over by someone or something or perhaps simply their own fears. The occupation proceeds until they are left with only a small vestibule where it is impossible to live.


This frightful progression is captured by the text and the music of Mendonça. He seems to have taken his cue from Hamlet to suit the music to the word, the word to the music without overstepping the modesty of nature. There are frightful “noises” when parts of the house are taken over which are represented by dissonant and agitated music. There are segments when the siblings carry on their routines; when Rosa knits or cuddles her “baby;” when the two are frightened or arguing. Mendonça shapes his music to these moods and events.


Holcroft’s text is in simple English reflecting the relationship of a brother and a sister caught in the family home under strange and frightful circumstances. The opera is sung in English.


English baritone Dunn, in a beard and sweater, is a bachelor, not old but perhaps past his prime who lives an almost robotic life with his sister. The two seem to have some inner life through reading and dreaming but externally their existence is pathetic even without the slow invasion of their house.


Whitely and Dunn did fine work and were convincing as the besieged couple.


Alex Eales designed a fine set consisting of a dining room and a kitchen. The set is turned around and becomes a vestibule for the final scene.


Katie Mitchell, a highly experienced theatre director, treated the opera as a stage play with excellent results. She orchestrated the movements of the characters and paid close attention to the details of their existence.


Now as to provenance. The opera is based on Casa Tomada, a novella by Argentinian writer Julio Cortazar. The text was prepared by English playwright Sam Holcroft. The music was composed by Vasco Mendonça who is Portuguese. The opera was commissioned by the Aix-en-Provence Festival but it is a coproduction of five other organizations spanning a swath of Europe. It is put together with support from the Cultural Programme of the European Union.


And this is for an opera that lasts one hour.


Now that is what I call international cooperation!
___


The House Taken Over by Vasco Mendonça opened on July 6 and will be performed sixn times run until July 17, 2013 at the Domaine du Grand Saint-Jean near Aix-en-Provence, France. http://festival-aix.com/
Posted by James Karas at 5:33 PM