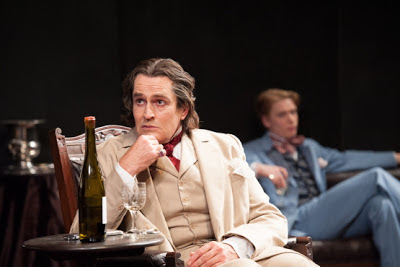 The story of Oscar Wilde’s trials, imprisonment and humiliation, in a word, his destruction, has been told countless times, yet it has lost none of its terrifying power to shock and disgust us.

David Hare took on the subject in his 1998 play, The Judas Kiss, which has been revived and is now playing at the Duke of York’s Theatre in London.

Hare picks up the story on the final day of Wilde’s first trial in which Wilde is the plaintiff in an action brought against the Marquess of Queensbury for libel. The Marquess had accused Wilde of posing as a sodomite. After a withering cross-examination of Wilde it became obvious that he was more than posing as a sodomite. The trial collapsed and Wilde was about to be charged with sodomy and gross indecency. The question arose: should Wilde flee abroad or stay and face almost certain conviction and imprisonment.

The first act of The Judas Kiss takes place in a hotel room in London where Wilde’s friend Robert Ross tries to persuade him to leave for the continent. The beautiful Lord Alfred Douglas (Bosie) whose father is persecuting Wilde argues that he should stay and fight. It is brilliant theatre. Witty, confrontational, and erudite with excellent development of character and situation. The three hotel workers provide great comic relief.

Rupert Everett gives an outstanding performance as Wilde. He bears an uncanny resemblance to the playwright and he is utterly convincing in his portrayal. Wilde on that fateful day appears defiant but he is in fact defeated. His eyes are deeply set in, he is unsteady on his feet, impetuous, at times irrational and drinking to excess. His wit has not deserted him and he pours out a large number of funny and perceptive lines. But his defeat seems so certain and so complete that he has ceased being a person and become a character in a drama that he is watching. He sees himself as a character whose fate has been planned by destiny. He is unable to accede to Ross’s rational advice and tosses his jacket on the floor in an act of defiance. He will wait for the police to arrest him.

If Fate decreed Wilde’s destiny, the more immediate cause was his homosexual affair with Bosie. Freddie Fox is simply superb in the role. Bosie is petulant, spoiled, arrogant, selfish, temperamental and pretty. The last attribute may be the only positive word that can be applied to him and many more pejorative ones can be marshaled to describe the little creep.

Holding the middle is Robert Ross played by Cal Macaninch. Ross was Wilde’s first homosexual lover and he is intelligent, rational and faithful. He puts up with abuse but stands his ground and never falters as a friend. A marvelous performance by Macaninch.

Hare provides three hotel workers in Arthur (Ben Hardy), Phoebe (Kristy Oswald) and Moffat (Alister Cameron). As I said, they provide some great humour and act as foils for the other characters. Kudos to all three for excellent work.

The problem arises in the second act. Wilde has served his prison sentence and is living in Naples with Bosie. The bravura of the defeated Wilde is gone. He is now dead. He sits in a chair almost throughout the whole act, wearing slippers on his bare feet. He is broke, dispirited and betrayed by everyone.

Bosie has taken up with an Italian stud and the two are having sex and going out as if Wilde does not exist. Ross visits and shows once again that he is a steady and generous friend. Bosie on the other hand is planning to return to England and reconcile with his mother who has promised him £300 per year.

Wilde has not lost all his wit but whatever comes out is a pale shadow even of the defeated man of the first act.

I found the second act a sharp drop from the first. The performances did not flag but adding the Italian stud Galileo (Tom Colley) who appears naked throughout the scene and speaks only in Italian, simply unsatisfactory.