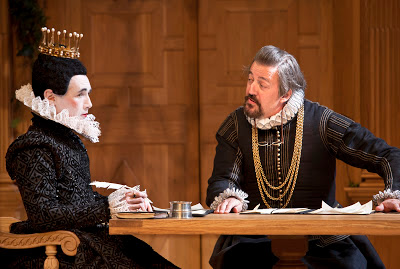 Shakespeare’s Globe Theatre strives for authenticity in its productions and has established a style of presenting works that has given audiences some riotous performances of the bard’s plays. It is an open-roof theatre and it operates only during the summer but its productions are played in other theatres as well.


The summer productions of Twelfth Night and Richard III have been transferred to the Apollo Theatre in London and are playing to sold-out houses.


Doing Shakespeare with an all-male cast is not unheard of especially since in his time there were no women actors. The small surprise is that men can take on all the roles today and barely raise a critical eyebrow or make much difference. A woman playing Olivia would be prettier than Mark Rylance and Johnny Flynn as Viola/Cesario may not be what we are used to but the quality of the acting is what makes the production a success and not the sex of the actors.


The success of Twelfth Night is based on the over-all conception of an exuberant comedy done on a practically bare stage and on the detailed direction by Tim Carroll of the hugely talented cast.


The star of both productions is Mark Rylance as Olivia in one and as Richard III in the other. I saw the plays back to back and it can best be described as a wonderful day with Mark Rylance. He is a hugely talented actor who can handle Shakespearean roles as Hamlet, Olivia, Richard III and others.


In her first scene in Twelfth Night, Olivia is reserved to the point of being stuffy and stilted. It doesn’t look like we are going to get many laughs out of him/her. Then she meets Cesario, Viola disguised as a man delivering the Duke’s message of love, and asks him about his parentage. When Cesario leaves she recalls her inappropriate question with a shock of recognition. She is falling for him and instead of repeating the question in a reverie she says “Oh, my God” sotto voce, shocked at her forwardness, and we laugh knowing exactly where she is headed. This is the type of detailed attention that Carroll pays to every line and Rylance delivers superbly.


Rylance opens up Olivia’s character slowly until she throws caution to the wind and goes after Cesario/Sebastion. A marvelous and memorable performance.


Rylance is equally effective as the very different and murderous Richard III. His Richard is a comic genius who enjoys his own humour. The light touch of his humour contrasts with the innate evil of the man who will stop at nothing in order to gain power.


The production brims with details that are unexpected, funny and brilliant.


Johnny Flynn and Samuel Barnett are the twins Viola and Sebastian and it must be easier to make two men appear identical than a man and a woman. Both do well in the roles.


Stephen Fry brings a marvelous voice and splendid portrayal of Malvolio. Carroll treats this problematic character fairly soberly. He is not made into a fool until the play calls for it and I found it quite an outstanding job by Fry.


It is hard to go wrong with the eternally drunk Sir Toby and the very foolish Sir Andrew and Colin Hurley and Roger Lloyd Pack bring in all the laughs. Pack plays the Duke of Buckingham in Richard III and he struck me as rather bland. The Duke should be far more forceful and conniving.

Orsino, the love-sick Duke, is played as a more of a he-man than a simpering lover by the Scottish-accented Liam Brennan. He drops the accent as Clarence and the Lord Mayor in Richard III.


Shakespeare’s Globe has a large, thrust stage with a large number of spectators, the groundlings, standing in the yard and around the stage. This encourages interaction between actor and audience with frequently hilarious  results. Such interaction is not limited to comedies. In a production of Hamlet when  a clean-shaven Rylance as the Prince of Denmark complained about having his beard plucked, a groundling reminded him that he did not have one. The actor looked at him and added “I know.”


What works at Shakespeare’s Globe does not work as well at the smaller Apollo Theatre. Fry and Rylance try to engage the audience but their success is limited. This audience was not prepared to become part of the action the way that the groundlings do on the South Bank.


Carroll to his credit does not rush through the dialogue. He is highly respectful of the text and the actors speak clearly and  deliberately. Twelfth Night is one of the best comedies ever written: Richard III is not one of Shakespeare’s best plays. The number of ways that they can be  produced is almost endless. Tim Carroll gives fresh readings of both and thanks to Mark Rylance a great day at the theatre.
______


Twelfth Night and Richard III by William Shakespeare opened on November 17, 2012 and continue in repertory until February 9 and 10, 2013 respectively at the Apollo Theatre, 29 Shaftesbury Avenue, London, England.
Posted by James Karas at 1:14 PM