ROSENCRANTZ AND GUILDENSTERN ARE DEAD BUT SOULPEPPER GIVES THEM SOME LIFE 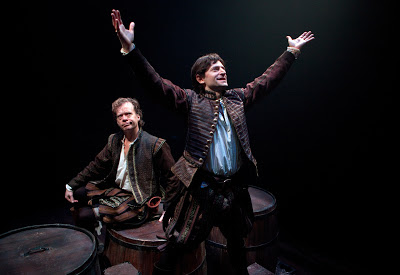 
Soulpepper starts off its offerings for 2013 with Tom Stoppard’s Rosencrantz and Guildenstern Are Dead. One cannot argue about the choice but unfortunately the production never manages to take flight despite some fine performances. I am not sure why but my anticipation for a scintillating production was left only partially fulfilled.


Rosencrantz and Guildenstern, first produced in 1967, is a clever, often witty and fascinating play that tells the story of the two minor characters in Hamlet. The Prince of Denmark, the Players and some of the other characters from Shakespeare’s play appear and there are more than passing allusions to Becket’s Waiting for Godot. There is enough meat there to fascinate and entertain but except for the occasional rise the production cannot be rated much above satisfactory.


We meet Rosencrantz (Ted Dykstra) and Guildenstern (Jordan Pettle) on the road, tossing a coin which always lands “head.” They vaguely recall being summoned to the Danish court but they seem to exist almost entirely in the present. Rosencrantz seems a bit brighter but the coin toss also may indicate that they are not even two sides of the same coin but one side only of the coin. Pettle and Dykstra gave us the philosophical, silly, clever and Godotesque nature of their characters quite well.


The title characters dominate the play and in fact are on stage almost throughout the evening. The other important character is Kenneth Walsh as the Player together with his “tragedians,” a troupe of underemployed actors. Walsh is flamboyant, cunning and very much a showman as the Player. His followers are not given much scope to display their wares, so to speak, but we do get the mythical picture of poor, travelling players.


Gregory Prest as Hamlet, Nancy Palk as Gertrude and Diego Matamoros as King Claudius are given a relatively small number of lines directly from Shakespeare’s play. William Webster makes a garrulous Polonius  whereas Leah Doz as Ophelia barely registers.


Director Joseph Ziegler seems unable to fuse all these parts into a well-oiled and working whole theatrical performance. Many of the good lines and the amusing or interesting situations as we watch Hamlet from the wings simply do not generate a sufficient level of amusement or entertainment.


Ziegler has chosen to stage the play in a theatre-in-the-round. The stage is placed in the middle with seats on all four sides of the theatre. Members of the audience inevitably end up with actors’ backs to them. Ziegler puts the actors diagonally to the stage so that we can see their sides when possible rather than their backs. Theatre-in-the-round may have advantages but it also has its drawbacks. In a small theatre, is it really necessary to adopt this type of staging?


Whatever the reasons, the spark that makes a performance into extraordinary theatre was mostly missing in this production.
_________


Rosencrantz and Guildenstern Are Dead  by Tom Stoppard opened on February 13 and will continue until March 2, 2013 at the Young Centre for the Performing Arts, 50 Tank House Lane, Toronto, Ontario, M5A 3C4. www.soulpepper.ca  416 866-8666.