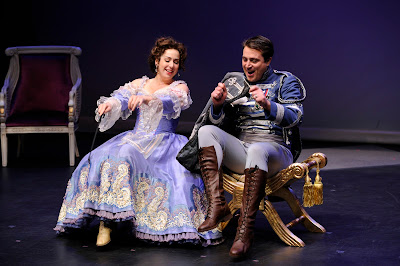 
If you are producing operetta it is hard to stay away from Franz Lehár’s The Merry Widow. Toronto Operetta Theatre does not intend to ignore this masterpiece of the genre and it is offering an enjoyable production to bid farewell to 2012 and usher in the New Year.


The production, directed by TOT’s General Director Guillermo Silva-Marin, generates energy and laughter along with Lehár’s melodies, lilting music and wonderful ensembles. Like all TOT productions, this Merry Widow is done within the limitations imposed by the Jane Mallett Theatre, a threadbare budget and an orchestra (under the enthusiastic baton of Derek Bate) that is no more than a band. But let’s look upon the donut and not upon the whole.


A reality check, please. There is a Balkan country on the verge of financial collapse. One of its citizens, Anna Glawari, has struck it rich and the Fatherland can be saved from going over the fiscal cliff if she marries a fellow compatriot and keeps her money at home. Subscribers to Foreign Affairs will have guessed that we speak of the famous Kingdom of Pontevedro. Ignoramuses have fingered another country.


Soprano Leslie Ann Bradley makes a convincing merry widow in many ways. She is attractive,  lively as becomes the moniker that precedes her marital status and has a lovely voice that does well in the comic songs as well as the gorgeously melodic “Vilja.”


As becomes an attractive woman with an extremely attractive bank account, Anna is pursued by many men but the real suitor is the playboy Count Danilo. Adam Luther looks like a playboy who is ready to get married and settle down. That is good because we do not want a scatterbrain to marry our heroine for her money and disappear. Vocally he was good without any attempts at scaling heights.

We also have a merry wife in Valencienne (Elizabeth Beeler), the spouse of Ambassador Zeta. She is mature woman of upstanding character who flirts lightly with Vicomte de Rosillon. Beeler has a full, luscious voice and her Valencienne managed to outsing and outsmart  her husband and her suitor. Keith Klassen as Rosillon and David Ludwig as the Ambassador were not at their vocal best on opening night.


Tenor Joseph Angelo has the role of Njegus, the Secretary at the Embassy and he deserves credit for generating a great deal of laughter. He twists his face, does double takes and races around in a funny performance.


There are a number of other characters who provide some humour and singing. There are differences in acting and singing abilities. Most of the laughs come through if not always successfully and the singing takes flight but it rarely soars. There is a baker’s dozen of a vocal ensemble which sounded wonderful


The action takes place in Paris at the Pontevedrian Embassy, Glawari’s residence and at Maxim’s. The Embassy has a few leather chairs and some furnishings but it looks like the fiscal crisis has already has had its effect. Anna Glawari may have struck it rich quite recently because she simply has not had time to furnish her apartment. Maxim’s has a few tables but that’s about all.


The costumes from Malabar were quite good. The men are in tuxes with medals where appropriate; the women in very nice gowns representing a world long gone.


Silva-Marin does not treat the text sacrosanctly. He adds all sorts of anachronistic references from emails to tweets, from Mayor Ford to the Gardiner Expressway, from Obama to Ahmadinejad, to the IMF and much more. All in good fun.


One cannot ignore the hole in the donut but if you concentrate on the sweet taste of the thing you will have a good evening at the operetta.
_____