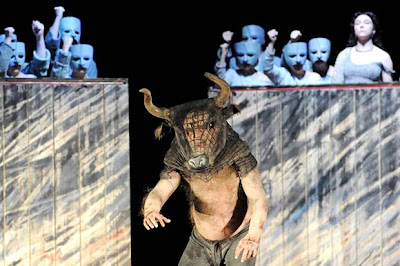 Everyone has heard of the Minotaur, the half-man, half-bull creature who was slain by Theseus. We also know that he used a ball of twine given to him by Ariadne in order to get out of the labyrinth where the Minotaur resided.

How was the Minotaur conceived? His mother, Queen Pasiphae, developed an overpowering lust for a white bull. She disguised herself as a cow and had sex with the bull. The result was The Minotaur.

The myth is absolutely arresting and I need hardly say that it can be interpreted many ways but has anyone wondered what the Minotaur may have thought? He was half-man after all.

Composer Harrison Birtwistle and Librettist David Harsent have thought about it and written an opera to give us their answer to the question and provide us with some details about the gory and fascinating story of Theseus and Ariadne.

The opera premiered in 2008 and it has been revived by the Royal Opera House, Covent Garden for five performances during January 2013.

The Minotaur is divided into thirteen scenes from the arrival of Theseus with the young men and women from Athens, called the Innocents, who will be devoured by the Minotaur. It ends with the death of the Minotaur.

The myth and its recreation by Harsent could not be more dramatic. There is the one-way love story between Theseus and Ariadne (or is she just using him to escape from Crete), the rape, murder and bloody devouring of the Innocents by Keres, the death spirits, a visit to the Oracle and much more.

The most fascinating part of the opera is the treatment of the Minotaur’s human half. While dreaming the Minotaur is able to speak and recall a different world and a different past. In the end, Theseus wounds him mortally and the Minotaur becomes fully aware of who he is and his past before he dies.

The scenes move seamlessly from the seashore where Ariadne greets Theseus’s ship to the Labyrinth below with a side trip to the Oracle. The seashore is indicated by a ship’s mast and a sandbar. The Labyrinth looks like a bullfighting ring, dark and forbidding with the scary Keres on raised benches. There is a video projection of billowing and perilous waves that we see several times.

Bass Sir John Tomlinson dominates the performance even though he does not seem to have the most notes to sing. He wears a wire mesh mask of a bull and sings a very demanding role with superb control. At age 66 and 35 years after his debut at Covent Garden, his performance was a marvel.

Mezzo soprano Christine Rice tackles the role of Ariadne which is vocally demanding and requires her to coax Theseus into taking her to Athens while facing her own past.

Baritone Johan Reuter gives a fine performance as Theseus. He has some very dramatic scenes that require vocal stamina and acting ability and he did very well.

Scenically and dramatically, then, this is quite an extraordinary work and Director Stephen Langridge gets first-class kudos for his work.

What about the music? This is a modern opera and it has modern music. The music is dramatic, wild, dissonant, with extensive use of percussion. The singing is stentorian wailing, rises to fever pitch and becomes calmer at times. The opera is written through of course and at times you feel that you are listening to very long recitative. The idea of melodic singing or music does not exist.

There are many things I can say about the opera and the extraordinary playing by the Orchestra of the Royal Opera House under Ryan Wigglesworth and the singing and performance of the Royal Opera Chorus under Renato Balsadonna. All complimentary in their way but what I cannot say is that I really enjoyed the music.

There is no accounting for some people’s taste.
______

The Minotaur by Harrison Birtwistle opened on January 17 and will be performed five times until January 28, 2013 at the Royal Opera House, Covent Garden, London. www.roh.org.uk