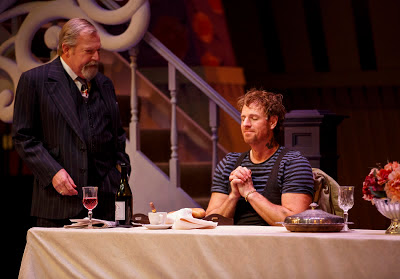 Michael Ball and Dan Chameroy in The Arsonists. Photo by Bruce Zinger.
Reviewed by James Karas


Max Frisch’s The Arsonists is a satire, a black comedy and a farce with a “chorus” and some musical numbers. Morris Panych, a man who knows a lot about comedy, directs a good production for Canadian Stage but there is something missing: laughter. There were a few laughs, no doubt, but I would have expected more guffaws. Was it just a bad audience?


The Arsonists is a post-World War II play (it started as a s radio play in 1953) that deals with moral and political issues that still resonate today.  A town is being set on flames by arsonists and the plot revolves around a well-off businessman and a couple of “visitors” to his house.


Biedermann, the businessman, is played my Michael Ball as a gentleman who smokes fine cigars, drinks good wine and is a perfectly decent human being. He does have some rough edges like cheating his partner and being ruthless in business. But he is doing just fine now and even if the rest of the town is set ablaze, he is sure that he will be safe. Ball is excellent for the role, gentle, a bit rough, eager to please and to protect his neck.


Fiona Reid is his wife Babette. With her distinctive voice and mannerisms, Reid is superb in the role where she is a bit ditzy but also realistic.


The Biedermanns are visited by Schmitz (Dan Chameroy), an unemployed wrestler who wangles his way into their house. He is a combination of con artist and brute and manages to get his way and settle in the Biedermann attic. We realize quickly that he is an arsonist. He is soon joined by Eisenring (Shawn Wright) and barrels of gasoline are assembled in the attic for the inevitable explosion.


Mr. and Mrs. Biedermann, to some extent, and the two arsonists especially, are dark comic characters. Chameroy and Wright play the characters as somewhat bumbling fools who can turn nasty, a combination of comedy and underlying violence. I thought they did an excellent job and I am not sure why there were so few laughs generated.


The play has a chorus reminiscent of Greek tragedy. In the opening scene the Chorus of Firemen appears as soon as Biedermann lights his cigar and chant some verses. There is a loud band on stage playing original music composed by Justin Rutledge. The music is heavy on rhythm that did nothing for me. The music and the chorus remove any idea of this being a realistic play.


The set is an outstanding amalgam of roof peaks, gables, living room furniture and the band. We have the inside of the Biedermann house with its long dining room table with two candelabras. There are stairs leading up to the attic which is in fact almost on the same level as the living/dining room. You get a cross-section of the house and have a sense of being outside and inside. Excellent work by set designer Ken MacDonald.


Frisch called The Arsonists “a moral play without a moral.” It is a morality play and an astute political commentary that applies to today. The words that went through my mind were appeasement and accommodation. Appeasement in terms of European, especially British attitude towards Hitler in the 1930’s and accommodation in terms of human rights in the 21st century.


Winston Churchill once said, “An appeaser is one who feeds a crocodile hoping it will eat him last.” Biedermann sidles up to the arsonists in the hops that he will be spared. He gets so close to them that he becomes almost one of them, even if one can argue that it was unwittingly.


Can the same argument be made about any number of extremists who we know are wrong but we tolerate or leave alone or think that they will just disappear?


There is another side to the appeasement coin which is called accommodation. Equal rights for women and gays, gay marriages, evolution, and many other such issues were anathema to most people at one time. Any hint of recognition was considered the thin edge of the wedge. Should we have shown strength in opposing these movements lest appeasement bring them about fully blown in our faces?


Frisch’s fascinating play does not address both sides of the coin. The surprise is that the play has been pretty much ignored. It was produced in London in 1961 and then again in 2007 in a new translation of Alistair Beaton (it is this translation that Canadian Stage is using) but that’s about it.


That is unfortunate because it is a provocative and challenging play that gets a very good production from Canadian Stage. Too bad the audience did not laugh more.
_____


The Arsonists by Max Frisch opened on November 15 and will run until December 9, 2012 at the Bluma Appel Theatre, St. Lawrence Centre for the Arts, 27 Front Street East, Toronto, Ontario. www.canadianstage.com
Posted by James Karas at 11:17 AM