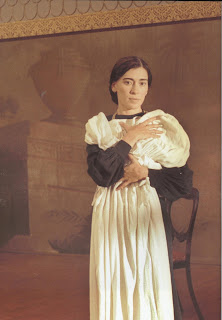 Victoria Haralabiidou
BRIDES ( ΝΥΦΕΣ) is the Greek entry at this year’s European Film Festival . The screening is free and on a first come first serve basis on November 19, 2012 at The Royal, 608 College St. Toronto at 8:30 p.m.


The film premiered at the Toronto International Film Festival in 2004 and I reviewed it for The Greek Press.
It seemed an appropriate time to re-publish the review as it appeared then for people who may be interested in this fine film.

Brides was one of four Greek films shown at this year’s Toronto International Film Festival. It tells the story of 700 young women, some of them teenagers, from , , and who were loaded on a ship heading for . They were mail order brides carrying a wedding gown and a photograph of their future husbands. Their marriages had been arranged, in a business-like manner, by “agents” or by other less commercial organizations.


The story is centered on Niki Douka, a young woman from sent to to marry a tailor and Norman Harris an American photographer returning to the from . Niki is in fact a substitute mail order bride, replacing her sister who did not like and returned to . Family honour demanded that the obligation to provide Prodromos, the tailor, with a bride be fulfilled.


Norman who is traveling first-class is fascinated by the brides and wants to photograph all of them. He meets Niki several times especially as her talent with a sewing machine lands her a job repairing the costumes of some ladies in first class. The handsome Irish-American photographer and the beautiful mail order bride begin falling in love.


The film tells a parallel story of Haro who was in love with a soldier and did not want to be ‘mailed’ to a husband. Her father caught her trying to escape, flogs her and shipped her out. Whereas Niki sees and accepts her duty to go to her husband with steadfastness, Haro is full of doubts and in the end is unable to complete the journey.


Not all the women are on their way to their husbands. The Russian agent is doing a lot more than arranging marriages, he is selling women into the sex trade and no one can do anything about it. He even asks his hapless victims to bring letters from their doctors certifying their virginity.


The story is captivating and dramatic and can easily be turned into a mawkish love story or a melodrama. Prominent Greek director Pantelis Voulgaris avoids both temptations and turns in a film that is both moving and a paean to the courage, integrity and moral fibre of the mail order brides.


Voulgaris lets the camera linger lovingly on the faces of the brides and allows the audience to see their innocence, their strength, their beauty, and their souls. A gorgeously photographed film that captures a fascinating facet of and the Balkans in the 1920s. It shows the poverty of the villages, the strength of the people and the eternal search for something better that started several thousand years ago when Greeks first crossed the to establish colonies in . Ironically, the film’s voyage took place two months before the Asia Minor Catastrophe that all but put an end to the Greek presence in that part of the world.


These are not 700 tragedies – they are 700 facts of life, of women who accepted their fate as it was handed to them and lived according to a moral code that most of us find incomprehensible.


Victoria Haralabidou gives a stunning performance as Niki. In her sculpted beauty she contains the loveliness and passion of the Greek peasant. She has the strength to fall in love, to maintain the moral code of her society and to fulfill her fate as she perceives and accepts it. Damian Lewis provides the perfect foil as the red-haired photographer who falls in love with her. Equal marks to Evi Saoulidou as the unfortunate Haro.


In short, a cinematic gem.


At one point in the movie, Niki tries to comfort the unhappy Haro by telling her that Canada will soon be full of Greeks. She was of course right and a few of the Greeks who did fill up were lucky enough to get tickets to see the film. A lot more lined up for hours outside the theatre without any luck. The rest will simply have to wait until the film is released so they can see a part of their past gorgeously presented.

Brides, a film directed by Pantelis Voulgaris, script by Ioanna Karystiani and cinematography by Yorgos Arvanitis premiered on at the Isabel Bader Theatre as part of the Toronto International Film Festival.
Posted by James Karas at 4:06 PM