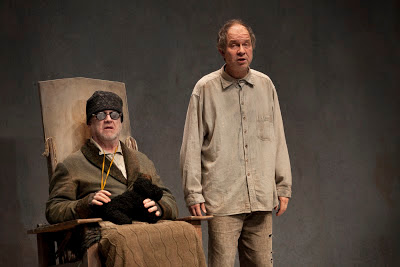 
“Weird” was the word on many lips, as people walked out of the theatre after seeing Samuel Beckett’s Endgame produced by Soulpepper at the Young Centre in Toronto.


There are many other words that can be used to describe the play and the production including complex, simple, absurd, provocative, profound, confusing, unique and the list goes on. The play and the Soulpepper production prove an extraordinary theatrical experience but the aforementioned qualities of the play are sometimes truncated in the single word “weird.”

Endgame has four characters who speak very ordinary words and it has no plot to speak of. The set is a forbiddingly gray room with two small windows and a doorway. Hamm (Joseph Ziegler) is seated in a large, old wheelchair, his head covered. He wears dark glasses. Clov (Diego Matamoros) is his servant. He is a bit nervous as he moves around the stage (the only one that does), answers Hamm’s sharp whistle and chatters with him.


No place is suggested but the play takes place beyond the end of civilization and near the end of all life. The simple conversations of the characters have far-ranging references and provide fertile ground for professors to complete their annual publishing requirements.


People who attend this production will see an outstanding rendering of the play with outstanding performances by the actors. All of them as directed by Daniel Brooks seem to personify the characters completely as one may have imagined them when reading the play that you forget you are watching a particular production.


Ziegler and Matamoros appear as the quintessential Hamm and Clov even if we have no idea what the quintessential representation of these characters ought to be. Nagg and Nell, ashen faces sticking out of the top of the garbage cans, are smaller roles but are done superbly.


Beckett created a distinct world in Endgame and this production captures or reproduces that dreadful (and frequently funny) world in such a way that you are perplexed, amazed, provoked and in the end walk out of the theatre mumbling nothing more intelligible than “that was weird.” Perhaps. But it is also profound and thought-provoking theatre  - a commodity that is not nearly as plentiful as one would like to see in Toronto.