OTELLO IN GRAND PRODUCTION LIVE FROM THE MET 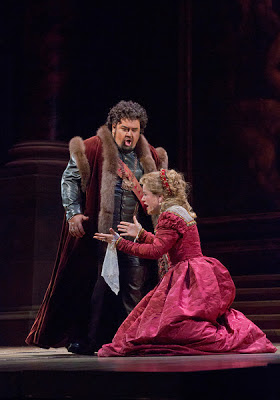 
The Metropolitan Opera’s current revival of Otello, first staged in 1994, is opera on a grand scale. A huge chorus, monumental sets and three main singers combine to bring a traditional but thrilling production even if it is only on a movie screen for hoi polloi who are not in New York. This is The Met Live in HD and one of the dozen productions that will be broadcast and re-broadcast during the 2012-2013season.


Verdi and director Elijah Moshinsky waste no time in firing up all engines as the curtain opens on a violent storm where Otello’s ship is in danger of foundering. He is coming to repel the Turks from Cyprus but he won’t have to. The enemy ships are sunk by the storm and Otello arrives to victorious exaltation.


An opera company with the orchestral, choral and scenic resources of the Met can do wonders with the opening scene and this production delivers all that you can wish for. The camera shots directed by Barbara Willis Sweete are judiciously focused on parts of the chorus and the main characters and we in the movie houses may have an advantage over the audience at Lincoln Center in being able to follow the scene in detail.


The victory at sea and abatement of the storm are matched by the expression of marital bliss in “Gia nella note,” the love duet between the recently married Otello and the lovely Desdemona. Tenor Johan Botha as Otello and soprano Renee Fleming as Desdemona end the first act on a note of serenity and splendour.

The turbulence of the storm however returns in the form of the emotional warfare that is soon unleashed by the malignant Iago. He is Otello’s ensign and was passed over for promotion by the callow Cassio and his hatred knows no bounds. Baritone Falk Struckmann is an outstanding Iago. He sneers, scowls, cajoles and spews hatred as he establishes total emotional control over his superior officer and drives him into a state of murderous jealousy. Struckmann maintains vocal and emotional control of the character and dominates the production.


Iago’s counterpart is the pure and beautiful Desdemona. Fleming has a luminous voice and emotional range that makes her an excellent Desdemona. She may not be quite as young as Verdi and Shakespeare imagined her but most of the singers in the production are middle-aged.


Fleming’s work as Desdemona is cut out for her throughout the opera but her ultimate moment comes in Act IV where she goes through a variety of intense emotions in the Willow Song and “Ave Maria.” An amazing performance by Fleming.


The third member of the emotional combat is, of course, Otello. Botha is a big man and when he raises his arms he presents a commanding sight indeed. Botha has a big tenor voice that stood him well in his tender moments and in his rages. Iago drives him into madness and the heavily perspiring Botha, eyes darting, indeed looks as if his Otello has gone around the bend.


Shakespeare’s Othello stabs himself “to die upon a kiss” and falls on the bed beside Desdemona. Otello’s life also supposed to ends upon a “bacio” but there is some awkwardness here. Desdemona lies dead on the steps at the foot of their bed instead of on the bed. Otello is singing his final wrenching notes of recognition and repentance and aks for a kiss and another kiss and one more kiss. But the way the two singers are positioned there is no “bacio” and it looks as if the voluminous Botha could not reach Fleming’s face even if he wanted too. Sloppy staging. Even if this Otello did not die upon a kiss, we should have been able to believe that he could have kissed her.
_______


Otello  by Giuseppe Verdi was shown Live in HD on October 27, 2012  at The Beach Cinemas , 1651 Queen Street East, Toronto, ON, M4L 1G5 and other theatres. For more information: www.cineplex.com/events
Posted by James Karas at 2:08 PM