RIGOLETTO HAS SOME FINE SINGING AND A CATALOGUE OF ?? IN CANADIAN OPERA COMPANY PRODUCTION 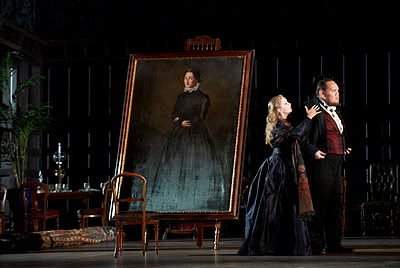 The Canadian Opera Company’s second offering for its 2011-2012 season is Verdi’s ever-popular Rigoletto. It comes on the heels of Robert Carsen’s stunning production of Iphigenia in Tauris. In Carsen’s brilliant conception of the opera, everything works to produce a great night of opera By contrast in Christopher Alden’s production of Rigoletto just about nothing works. At the end of the evening, you are left scratching your head wondering what the hell Alden was trying to do.

Rigoletto by Giuseppe Verdi opened on September 29 and will be performed twelve times on various dates until October 22, 2011 at the Four Seasons Centre for the Performing Arts, 145 Queen Street West, Toronto, Ontario. Tel: 416-363-6671. www.coc.ca
Posted by James Karas at 9:52 AM