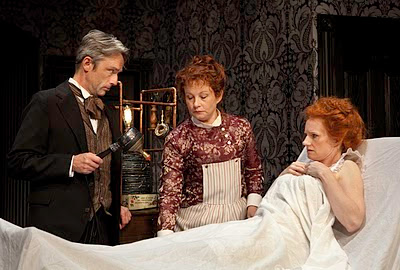 Dr. Givings (David Storch) and his wife Catherine (Trish Lindstrom) have just had a baby and they are showing all the parenting skills of two idiots living under a bridge in the Don Valley. We are in their living room but “in the next room” Dr. Givings practices medicine.

The device is applied in a very professional and antiseptic way by the good doctor and his assistant Annie (Elizabeth Saunders.) Guess what? Mrs. Daldry has an immediate “paroxysm” and she feels much better. She comes back again and again for more treatments.

Dr. Givings is a dunce who believes that he is a scientist. His wife is an idiot (there is a subplot about her baby and a black wet nurse played by Marci T. House). Yes, there was suppression in the 19th century and sex for some woman may have been no more than “I close my eyes, open my legs and think of England” but people were not that stupid.

Director Richard Rose, as I said, does not help the play. David Storch is made to look even more foolish than the script calls for and he appears like an ineffectual poseur who knows and understands nothing. His assistant Annie masturbates women and she is getting some sexual pleasure out if it but does she not realize it?

Lindstrom’s Catherine and Johnson’s Daldry are sexually suppressed to the point of stupidity and even after repeated orgasms the latter does not quite connect unalloyed sexual pleasure with the “medical treatments.”

Marci T. House plays the wet nurse who lost her son and has to give her milk to another child with humanity and grace and she is a good change from the rest.