PRAISE THE LORD FOR SPIRITED PRODUCTION OF TARTUFFE FROM VILLAGE PLAYERS 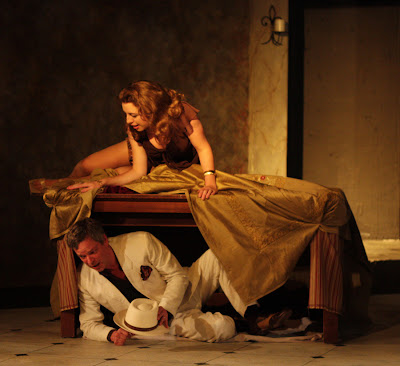 The Village Players have opened their 38th season with a spirited production of Moliere’s Tartuffe using a robust prose translation by David Nicholson.

There are several achievements in the above sentence that deserve emphasis. The Village Players occupy a small basement theatre on Bloor Street West in Toronto and will be putting on five plays during their 2011-2012 season. Their survival alone is evidence of their tenacity especially at a time when many other theatrical troupes have fallen by the wayside.

Tartuffe belongs to that rarefied company of indisputably “great” plays. It was written in Alexandrines and it has been translated many times in English, one of the best translations being the rhyming couplets of Richard Wilbur. Most actors have difficulty enunciating them and directors are well-advised to steer away from the play unless they have a superior cast.

The Village Players have side-stepped that problem by producing the play in modern dress in a new prose translation that is colloquial, quick and works well.

Tartuffe (Trevor Birrell) is a religious humbug and conman who is adored by Orgon (David J. Phillips) who is prepared to give his daughter Mariane (Margaret Brock) and all his property to the fraud artist. Tartuffe is not content with just that and wants to have Orgon’s wife Elmire (Carly Tisdal).

Director Anne Harper gives us a fast-paced, indeed spirited production that lets you enjoy the play without the slower pace that is sometimes dictated by the rhyming couplets.

Janice Tate plays Mme Pernelle, Orgon’s no-nonsense virago of a mother. She shoots her lines like darts as she struts around the stage telling everyone how to live and what to do. Equally lively are CeAnne Walsh as the maid Dorine and Brock as Mariane.

The counterbalance to the brisk movers are the holy-schmolly artuffe, Orgon and Cleante (Jonathan Thomas), Orgon’s sane brother-in-law.

Elmire gets a funny scene with Tartuffe where she lures him into attempting to seduce her while the dummy Orgon is hiding under a table. Birrell manipulates his eyebrows and leers at her like the dirty old man that Tartuffe is. Well done. That results in the hypocrite being exposed but it is almost too late for Orgon because he has already deeded all his property to Tartuffe. Here Moliere brings in a rex ex machine to render justice and end the play.

Special mention should be made of Scott Cavalheiro who was a last-minute replacement for the role of Damis, Orgon’s son. He had to appear with script in hand and he did a superb job. Even though he had to look at his lines, he never just read them but acted them out very well.

There are some small issues with the translation rather than adaptation of this 17th century play that is done in modern dress. When Tartuffe is feeling Emire’s skirt, he refers to her gown. Expressions like “at your service” and kissing of hands are a bit awkward in the 21st century. But these are small matters in a production that Molière himself (who played Orgon in the original production) would have probably enjoyed.