ANOTHER AFRICA: REPLAY AND REPETITION MAKE FOR AWFUL THEATRE FROM CANADIAN STAGE 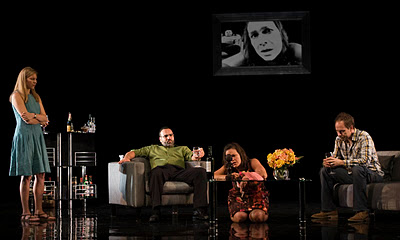 Matthew Jocelyn, the Artistic and General Director of Canadian Stage is a man of ambition, vision and talent. He wants to uproot Canadian Stage from its traditional fare of middle of-the-road classical and modern plays and thrust it into bold, innovative, experimental and spectacular theatre. Jocelyn aligned half a dozen plays for the 2010-211 season, his first, that were almost unheard of by most theatre goers. Success was mixed but no one can argue that he broke new ground.

This year’s programme is no less imaginative and innovatively aggressive. Check out the titles and test your knowledge of modern theatre: I Send You This Cadmium, The Test, Orpheus and Euridice, Red, Cruel and Tender: Beckett: Feck It!, Dark Matters, Clybourne Park and The Game of Love and Chance. How many of these titles can you recognize let alone have seen? No too many, I suspect.

Another Africa, Canadian Stage’s first production of the current season may be somewhat more familiar because it was presented during the 2010 Luminato Festival in Toronto and has now been adapted for a run at the Bluma Appel Theatre. The production by Volcano Theatre consists of two plays, Shine Your Eye by Binyavanga Wainaina and Peggy Pickit Sees the Face of God by Roland Schimmelpfennig with The Stranger, a prologue by Deborah Asiimwe.

For The Stranger, the actors walk on the stage, welcome the audience, say a few words, speak in several languages and depart. They are directed by Weyni Mengesha and I have no idea what they are supposed to have added to the evening. Next.

Shine Your Eye is set in Nigeria and it examines the personal lives of several of its people as well as providing commentary about a corrupt country. The central character is Gbena Beka (Dienye Waboso) a brilliant young woman who is involved with a scammer named Lucky (Naakue Chrispin Tambari and Doreen (Ordena Stephens-Thomson), a woman with whom she talks on Skype.

The characters address the audience directly for much of the play or Gbena and Doreen talk on Skype. Images of Nigeria are projected on a monitor and there are two young men who act as a Chorus. Gbena is the daughter of a visionary and upright politician who was brutally assassinated and she is trying to find a professional and personal space for herself.

Intimate chats on Skype, stentorian or plaintive addresses to the audience and the commentary about the social and political situation in Nigeria did nothing for me except evoke impatience and unease.

In Peggy Pickit Sees the Face of God, Carol (Maev Beaty) and Martin (Tom Burnett) have just returned from Africa and are seeing their friends Frank (Tony Nappo) and Liz (Kristen Thomson) after a six year absence. There is a great deal of phony jollity as the couples meet and you know that less pleasant stories will be revealed as they talk and drink. Frank and Liz have a brilliant child (we do not see her) who has written a letter to Carol and Martin’s adopted child in Africa. Carol is a doctor in a village where only the very young and old are left and AIDS is a problem and perhaps an epidemic.

The private stories of the two couples and the lives of the Africans that Carol and Martin are involved with may hold much interest but the method of telling them is excruciating. There are constant pauses in the action to allow for commentary on what was just said. Then the last part of the scene is repeated. It is like having an announcer comment on a sports game and then watching an instant replay. Some incidents are repeated god knows how many times and as a result you end up checking your watch with alarming frequency.

There is also a monitor backstage and close-ups of the actors are occasionally projected on it. There were some technical problems the night I saw the play and I am not sure if that prevented the close-ups from being shown all the time or if it was intentional.

Whatever the author’s vision may have been about the impression to be made by the constant interruptions, commentary, repetitions and video projections, director Liesl Tommy and the actors failed to bring it out. It was a bad night at the theatre.

Another Africa, plays from Volcano theatre’s The African Trilogy opened on September 29 and will play until October 22, 2011 at the Bluma Appel Theatre, St. Lawrence Centre for the Arts, 27 Front Street East, Toronto, Ontario. www.canadianstage.com
Posted by James Karas at 1:09 PM