THERE IS MORE TO GREECE THAN JUST FRAPPE 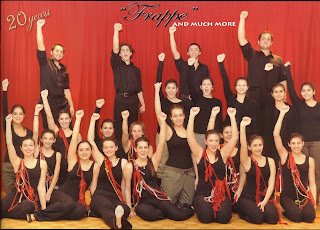 Last week the shell of what was to become the Hellenic Cultural Centre near Warden and Ellesmere in Toronto was put up for sale. The Greek Community of Toronto celebrated its centenary two years ago and the Cultural Centre was to prove its greatest achievement, the symbol of its maturity. It has turned into its greatest disaster.

One of the main functions of the Centre would have been to provide a theatre. The Hellenic Heritage Foundation had pledged one million dollars for the theatre and the expectation was that The Community Theatre Nefeli would finally gain a performance space many steps up from the makeshift facilities on the second floor of the Polymenakio Cultural Centre behind the St. Dimitrios Church. It will not happen.

Nefeli, under the stewardship of Nancy-Athan Mylonas, has been around for twenty years. My guess is that at least several thousand youngsters have been involved with it over the years. They have travelled widely, won numerous awards and, no doubt, have learned about the theatre, singing and dancing.

If the Greek Community is supposed to maintain and promote Greek culture and Hellenism, then I dare say that Nefeli Theatre has done more in that direction than all the dances and speeches of visiting politicians put together.

Nefeli is presenting a variety of dances, songs and sketches this year and the main theme is a salute to Hellenism and some gentle poking of fun at Greeks. The title Ελλάδα δεν είναι μόνο Φραππε (Τhere is more to Greece than just Frappe) is an indication of a spirited defense of Greece which has been getting some pretty bad press lately (to put it very mildly) and like the Greek Community of Toronto is, according to some, on the verge of bankruptcy.

The revue is based on the poetry of Angelos Sikelianos, Yiannis Ritsos and “Kataxnia” by Kostas Virvos with music by Christos Leontis. As with anything that Nancy Athan-Mylonas touches, expect it to be tailored to her taste and the talents of Nefeli Theatre.

The revue contains some rousing patriotic songs and a number of sketches. It delves into Greek history from the Secret School during the Tourkokratia to the protests in Mel Lastman Square in North York over the Macedonian issue. There is a sketch about the Nazi occupation where the violence was so realistic that a lawyer sitting beside me got worried enough to comment that “I hope they checked their liability insurance.”

But it was not all patriotic fervor. There were several very funny sketches. The funniest was the one about Madame Soussou with the very pregnant Irene Bithas-Georgalidis and Maria Mattheou. Think of a young Carol Burnett and you will appreciate Irene’s enormous and natural talents. She can play a peasant woman with a broom or the pretentious Madame Soussou and bring the house down. Mattheou is a very talented comedian and she shone best as the waitress in the Stavrakas sketch with Nikos Takas.

The show is constructed around an exercise assigned to a theatre class. The students pick out props from past productions of Nefeli and they are asked to describe how the prop relates to their Greek origins. This provides the impetus for the sentimental journey down memory lane of both the Theatre Company and Greek history.

The show involved some seventy people (I did not count them) ranging in ages from six to seventy five. Loukas Economou is the 75-year old and he has been with the company since its inception. Most of the others were probably not even born when the troupe was organized.

The show was put together and choreographed by Athan-Mylonas with English excerpts by Lydia Soldevila-Tombros. Vicki Chalkiopoulou is the Choir Master.

Enthusiasm generated by amateur theatricals can only be envied by professional companies – applause, laughter, tears and an audience enrapt by the performance.

The programme contains the names of dozens of people who have worked behind the scenes as well as those on stage. It is an astonishing communal and Community achievement that, it is worth repeating, has been around for twenty years.

The question remains: Will it continue?
___
ΕΛΛΑΔΑ ΔΕΝ ΕΙΝΑΙ Μ,ΟΝΟ ΦΡΑΠΠΕ ( There Is More To Greece Than Just Frappe) opened on January 28 and played until February 13, 2011 at the Polymenakio Cultural Centre, The Greek Community of Toronto, 30 Thorncliffe Park Drive, Toronto, Ontario. www.theatre-nefeli.com Telephone (416) 425-2485
Posted by James Karas at 1:19 PM