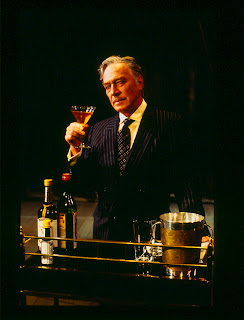 Gene Fowler entitled his 1944 biography of John Barrymore Good Night, Sweet Prince. He thus placed the actor in the pantheon of theatrical royalty and related him to Hamlet, the greatest and most complex character in drama. In other words, Barrymore (1882-1942), had become a legend.

Author William Luce has undertaken to bring a piece of that legend back on stage through the talents of Christopher Plummer. His play Barrymore has been heavily advertized for months in the Toronto area and even if you are living in a cave you should know that it is now playing at the Elgin Theatre.

The play looks at Barrymore in the winter of 1942, “three months after Pearl Harbor” we are told and, as it turns out, shortly before his death on May 29, 1942. We see Barrymore rehearsing or more accurately trying to learn the lines of Richard III. He drinks, staggers, cannot remember a line, recalls incidents from the past and is always witty and engaging. He has a prompter named Frank (John Plumpis) who speaks off stage.

Plummer has a mellifluous voice, a magnificent stage presence and an unerring ability to deliver lines ranging from acerbic barbs to Shakespearean verses. Plummer, like Barrymore, is in the winter of his career and he can no doubt relate to an actor looking back over a long career with moments of achievement and failure.

The play lasts only about ninety minutes and Plummer is, needless to say, on stage all the time. Many of the recollections are personal, like his four marriages, relations with his siblings, Lionel and Ethel, his drinking, his progressive deterioration and his inability to master scripts.

The connecting link for the recollections is his attempt to say the opening soliloquy of Richard III, “Now is the winter of our discontent.” We hear numerous snippets from Shakespeare and even more witty comments usually self-deprecating.

Luce is enamoured of Wildean inversions and there are witticisms like my wife made our marriage work so I had to leave. (I paraphrase). There is the line about the drunkard who had varicose veins in his eyes. When told to look into AA by his exasperated prompter, Barrymore replies that he will drink anything. When Barrymore tells mogul Sam Goldwyn that a movie he is about to make is about two lesbians, the latter replies that “we will make them American.”

These are all great anecdotes about old age, excessive drinking and life in show business. A bit like a highly literate George Burns monologue.

We see a lot of Barrymore in his dotage but we would like a glimpse of him at the height of his career. Could we not be treated to the whole of “Now is the winter of our discontent” soliloquy as Barrymore performed it before his decline? We are treated to incomplete recitations of the “What a piece of work is a man” soliloquy and the “get thee to a nunnery” speech from Hamlet but both are cut short for cheap laughs.

Barrymore became a legend because of his acting ability and not because of his drinking, womanizing or wittiness in old age. Plummer could have delivered some examples of what Barrymore could do to justify a play about him so many decades after his death.

Barrymore was first produced at the Stratford Shakespeare Festival in 1996 and it eventually made it to Broadway where it garnered several awards including a Tony Award for Best Actor for Plummer. Gene Saks directed the production.

On page 1 of his biography, Fowler quotes Barrymore’s favourite lines from Shakespeare, the “O! what a rogue and peasant slave am I” soliloquy from Hamlet. Would it not have been wonderful to hear Barrymore’s voice through Plummer intoning those great iambic pentameters? Such wasted opportunities!
____

Barrymore by William Luce opened on January 27 and will run until March 9, 2011 at the Elgin Theatre, 189 Yong St. Toronto, Ontario. www.barrymoretheplay.com.
Posted by James Karas at 11:51 PM