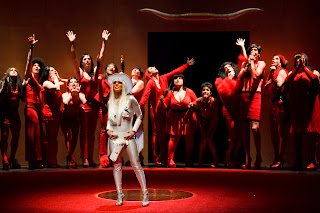 
Saint Carmen of the Main, Michel Tremblay’s 1976 play, takes place in Montreal’s red light district. It is a play full of hookers, transvestites and pimps, what are now politely called sex workers. The play is described as a twentieth-century Greek tragedy. There, you have two reasons to sit up and pay attention.

Saint Carmen is now playing at the Bluma Appel Theatre in a production by Canadian Stage and the National Arts Centre English Theatre directed by Peter Hinton. The play is a commendable choice and in line with Artistic Director Matthew Jocelyn’s mandate for adventurous programming.

On the realistic level, the play is about a country-and-western singer named Carmen from Montreal’s seedy Main district. She goes to Nashville to perfect her art and on her return home, decides to sing her own songs. She is opposed by the people in power in her world, call them managers, bar owners or pimps and has a bad end.

But Carmen, in the process of expressing her desire for artistic freedom, becomes a spokesperson and a force for the down-trodden (read Quebec, if you will) and her story gains a mythical aspect. Carmen, her antagonists and the people she speaks for become representatives of a much broader cultural and political world. This is the type of representation that has its origins in Greek tragedy, in the Royal House of Thebes and in the House of Atreus, for example.

The play’s allusions and relationship to Greek tragedy are intentional and stated outright by Tremblay. He was heavily influenced by Athenian drama and Saint Carmen (a part of a trilogy) is directly influenced by it.

The play opens with a chorus of fourteen hookers and transvestites dressed in bright red reciting a choral ode about the return of Carmen from Nashville and identifying her with the sun. In fact, Carmen is the sun. The stage is bathed in red and there is a large doorway in a wall that also alludes to classical theatre.

There are five characters aside from the Chorus but all five parts can be played by three actors as would have been done in Ancient Greece. Carmen has long white hair and is dressed in white as if ready to be sacrificed to some angry god. Her antagonists, Maurice (Jean Leclerc) and Toothpick (Joey Tremblay) are dressed in black. Gloria (Jackie Richardson), another singer, is just plain menacing.

There are some exceptional performances, staring with Laara Sadiq’s portrayal of Carmen. Carmen according to the title is canonized. She comes from a troubled and bizarre background and lives in the underworld where violence is imminent. She is a saint, a sacrificial victim and a part of the sleazy demimonde. Sadiq conveys all of these worlds.

Diane D’Aquila plays Harelip, a dresser, friend and advisor of Carmen and she does a superb job. Jean Leclerc plays the heavy and murderous Maurice with assurance as does Joey Tremblay as Toothpick. Jackie Richardson is a powerhouse of talent and she shifts her weight with mastery, especially in a lengthy aria-like scene with Carmen.

Greek tragedy is a long way from Montreal and Michel Tremblay does not attempt to imitate Aeschylus. But he has taken a local story and infused it with sufficient allusions to Athenian drama to create a richly textured play that stands on its own. You cannot have a twentieth-century Greek tragedy but you can have a story based in the seedy part of Montreal reach back, however imperfectly and uncertainly, two and a half millennia to the sun-drenched Theatre of Dionysus on the foothills of the Acropolis.
______
Saint Carmen of the Main by Michel Tremblay opened on February 10 and will play until March 5, 2011 at the Bluma Appel Theatre, St. Lawrence Centre for the Arts, 27 Front Street East, Toronto, Ontario. www.canstage.com
Posted by James Karas at 10:44 PM