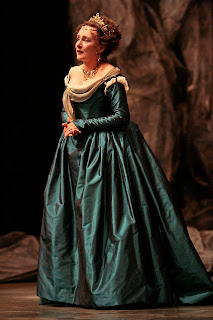 Last year, the Stratford Shakespeare Festival made one of its infrequent forays into Ancient Greek drama with a highly successful production of Euripides’s The Trojan Women. It would have been nice if that were the beginning of a trend but it did not happen. The closest we get to Greek drama this year is the production of Phèdre, a neo-classical tragedy by Jean Racine.

The production is billed as a World Premiere and they do not mean the 1677 play itself but a new translation of the work by playwright Timberlake Wertenbaker. Racine expressed the intense passion of Phaedra and the high drama of the story in tightly-knit rhyming couplets. Stratford however has chosen a prosaic translation for this production.

That is clearly not the mode of expression chosen by Racine and Wertenbaker’s translation, while it is clear it a ling way from Racine’s elevated language. Director Carey Perloff has the actors speak in a heroic style otherwise there are sections of the play that would sound more melodramatic than tragic, more akin to daytime television than poetic drama.

The language or mode of expression is even more important than the plot and one cannot get away from the fact that there is a huge difference between poetry and prose. Just imagine “To be or not to be” being rendered as “I just can’t make up my mind whether I should live or commit suicide.”

Phèdre tells the story of the love of Phaedra for her stepson Hippolytus. She is the wife of Theseus and is fully aware that her passion is completely improper. The problem is that her knowledge of the impropriety is not sufficient to control her passion. The tragic result is inevitable.

Phèdre has as its backdrop a complex political situation. Theseus is away from his kingdom and Hippolytus has fallen in love with Aricia, an Athenian princess and the last in line of the royal family that Theseus displaced as rulers of Athens. Hippolytus himself is the son of an Amazon, a foreigner, and there may be issues about his right of succession. Phaedra has children with Theseus and they may have a superior claim to the throne.

The real thrust of the play however remains the overwhelming power of love over rational thinking. Stratford is lucky in having Seana McKenna in the name role. She has extensive experience in Greek tragedy including a signature performance as Medea. She walks on the stage slightly crouched over with one hand on her stomach and the other stretched out for support. She is in the throes of all-consuming love that cannot be admitted and she gives a superb performance as the tortured queen. Jonathan Goad as Hippolytus looks young and innocent and contrasts perfectly with the much-older and disheveled Phaedra.

Tom McCamus gives a very dramatic and polished performance as Theseus, the blind father who curses his son. In one of the most dramatic deaths in mythology, Hippolytus is killed by a bull that rises from the sea. This a reference back to the bull that Phaedra’s mother had sex with and gave birth to the Minotaur, Phaedra’s half-brother. Theseus killed that bull with the help of Ariadne, Phaedra’s sister whom he married and later abandoned. Things do not get more dramatic than that.

Phèdre requires some heavy-duty supporting cast and the production is exceptionally well-served by Roberta Maxwell as Phaedra’s nurse Oenone, Sean Arbuckle as Théramène and Claire Lautier as Aricie. Wertenbaker seems a bit schizophrenic in her use of French names for most of the characters rather than relying on English equivalents such as Aricia, Theramenes.

The costumes suggest the confined atmosphere of the 17th century theatre rather than the town of Troezen by the sea where the play is set. There is a suggestion of rocks on one side of the stage but aside for some water in a well there is no other scenery. The sea is a major element in the play and there should have been some suggestion of its presence on the set.

According to Perloff “this is a version for North American actors” which sounds like this is “Racine for Dummies”. Wertenbaker’s translation is described as an unrhymed 10-syllable line but it sounds like prose. McKenna and the other actors are more than capable of handling complex poetry and people who go to Stratford for Shakespeare and Ben Jonson should not be patronized with “North American” versions. To paraphrase the comment made about Alexander Pope’s treatment of the Homeric texts, this is a decent rendition of the play but we must not call it Racine.
Posted by James Karas at 9:08 PM