AWAKE AND SING, LOOT AND OF THE FIELDS, LATELY FROM SOULPEPPER 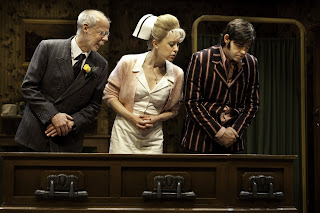 
If you are yearning for good theatre and Stratford and Niagara-on-the-Lake are too far for you, Soulpepper Theatre Company is happy to fill the gap with a trio of marvelous plays at the Young Centre for the Performing Arts. There is an American, an English and a Canadian play; two are realistic, domestic dramas about working-class immigrants and the other is about a completely different world. I speak of Clifford Odets’ Awake and Sing, Joe Orton’s Loot and David French’s Of the Fields, Lately.

You don’t hear much about Clifford Odets these days. In fact his plays are performed so infrequently that I have never seen one before. This was not always so. He burst on the theatrical scene in 1935 and had three plays running in New York at the same time. By 1938, he was so famous that he appeared on the cover of Time Magazine. He went on to write about a dozen plays and numerous scripts for Hollywood movies until he died in 1963 at the age of 57.

Odets was part of The Group Theatre, a collaborative company that was established in 1931. Elia Kazan was one of its most celebrated members. Like Kazan, Odets was a member of the Communist Party for a while in the 1930’s. In 1952 when Kazan appeared before the House Un-American Committee and gave the names of eight fellow members of the Communist Party, Odets was one of them.

Soulpepper has revived Odets’s 1935 play Awake and Sing. It was the first play that Odets began to write. He then dashed off his famous one-acter Waiting for Lefty and it was produced. Awake and Sing was produced six weeks after Waiting for Lefty.
Awake and Sing is about three generations of a Jewish family that live in a working class apartment in the Bronx in the 1930s. There are several plot strands but this is a realistic story about the lives of the Bergers. Bessie (powerfully performed by Nancy Palk) and Myron Berger (Derek Boyes) are a working class couple trying to make ends meet. Bessie is a tough matriarch who maintains the family’s morals and discipline. Her husband is a weakling who is not capable of much.

Their daughter Hennie (Sarah Wilson) becomes pregnant and Bessie arranges for her to marry Sam (Matthew Edison) a pathetic weakling who resembles Myron. Their son Ralph (Jonathan Gould) is in love with a non-Jewish woman and Bessie will have nothing do with her.

Bessie’s father Jacob (William Webster) lives with the Bergers and their friend Moe (Ari Cohen) is a frequent visitor. The story of the extended Berger family is one of poverty and grinding hard work just to make ends meet. It is also the portrait of a strong family of recent immigrants in which the older generation tries desperately to maintain the old values.

Awake and Sing may be considered as a quintessential Jewish play but with very few changes it will fit any ethnic minority that was trying to make it in New York. A Greek, Polish or Italian mother would have freaked at the idea of her only son marrying a woman from a different background. We are all the same.

David French burst onto the Canadian theatre scene in 1972 with Leaving Home, his first play about the Mercer family of Newfoundland. He followed it up with Of the Fields, Lately in 1973 where Ben returns to his parents’ home in Toronto. Jacob, his father, has had a heart attach and Mary, his powerful mother, is trying to negotiate a reconciliation between father and son and keep the family going. The Mercers, like the Bergers, are working class immigrants, trying to make it in Toronto.

It is a moving play and Soulpepper has given it a marvelous production. Diane D’Aquila gives a superb performance as the strong woman caught between a weak and blustering husband (Kenneth Walsh) who beat and drove away his son Ben (Jeff Lillico). She also has to deal with her brother-in-law Wiff (Eric Peterson) whose wife just died but who can’t pass by a bar without stopping for a few drinks. Peterson is splendid as the disheveled Wiff and Lillico can get a patent for acting as the unsure young man trying to find himself and deal with a difficult father. Full marks to Walsh for his performance as Jacob and to director Ted Dykstra for bringing this quintessentially Canadian play back to us.

The working-class people and the worlds of Awake and Sing and Of the Fields are quite recognizable. No such thing can be said of Loot, a black comedy of cruelty and bizarre situations. The first thing we see is an open coffin containing the body of a woman. The dead woman’s husband is more concerned about the flowers than he is about his wife’s death and her son and his accomplice are looking for a place to hide the money that they have robbed from the bank. They decide to put the body in a closet and place the money in the coffin.

The police arrive and there is physical violence added to the disrespect shown for the dead body.

Orton’s wit is sharp and biting, a sort of sadistic Oscar Wilde, and he paints a bleak picture of everything. Oliver Dennis, Nicole Underhay, Matthew Edison and Michael Hanrahan play the wacky and wacko characters of the piece. I am not sure if director Jim Warren captured all the humour and nastiness of the play but I enjoyed the performance.