FYROM v. GREECE - FROM THE STREETS TO THE INTERNATIONAL COURT OF JUSTICE 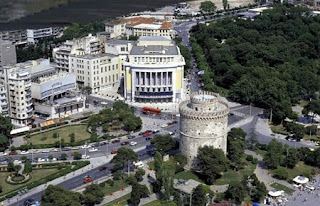 HOW TO HAVE YOUR CAKE AND EAT IT TOO


In September 1991, the Socialist Republic of Macedonia, one of the constituent parts of the Socialist Federal Republic of Yugoslavia, held a referendum and subsequently declared itself an independent and sovereign nation under the name Republic of Macedonia. It quickly sought international recognition. Greece objected to the recognition of the new nation under the name Republic of Macedonia claiming that it implied territorial claims against the northern Greek province of Macedonia. The new Republic claimed that it had no territorial claims against Greece while at the same time adopting Greek symbols. Even a picture of the White Tower, the symbol of Thessaloniki, appeared on some souvenir currency printed by fervent nationalists. In FYROM the line between state affairs and private enterprise can be pretty blurry.

Feelings and tempers rose on both sides of the border and even more so in the Diaspora. A temporary solution was found in April 1993 when the United Nations granted membership the new country on condition that it will be “provisionally referred to for all purposes within the United Nations as ‘the former Yugoslav Republic of Macedonia’ pending settlement of the difference that has arisen over the name of the State”. (UN Security Council Resolution 817 (1993).

FYROM and Greece signed an Interim Accord on September 13, 1995. The Accord opens with some grandiose and fulsome statements about refraining from the use of force, being guided by the spirit and principles of democracy and the desire to establish peaceful relations and promote future cooperation.

The first section of the Accord is entitled “FRIENDLY RELATIONS AND CONFIDENCE-BUILDING MEASURES”. Considering what happened after the Accord was signed this is ironic to the point of being comical. So much for wishful thinking.

The bizarre part is that the Accord does not mention the name that is acceptable to Greece for “the Party of the Second Part.” Article 1 states that Greece will recognize “the Party of the Second Part as an independent sovereign state, under the provisional designation set forth in a letter of the Party of the First Part of the date of this Interim Accord.”
Annexed to the Accord is a very short letter from the then Greek Minister of Foreign Affairs Karolos Papoulias which states that “Greece recognizes the party of the second part within its internationally recognized borders, with the provisional name of the former Yugoslav Republic of Macedonia, pending settlement of the difference that has arisen over the name of the State.”

Astounding as it may appear, the most crucial part of the Accord and the issue that will dominate relations between the two nations was incorporated by reference to a sloppily drafted letter that solved almost nothing.
Rather than posing positive obligations on FYROM (“You will do or you will not do …”), the woefully worded Accord imposes an obligation on Greece not to object to FYROM’s application to join international organizations of which Greece is a member. If Greece is a member then FYROM can only be called FYROM. The clear implication is that if Greece is not a member of that organization, then FYROM can join as the Republic of Macedonia.

Greece kept its part of the Accord by not objecting to FYROM joining a number of international organizations including the Organization for Security and Cooperation in Europe, the Council of Europe, the World Trade Organization and others.

Negotiations and meetings followed in an attempt to resolve the name issue but no solution could be found.

In the meantime, FYROM mounted a three-pronged attack on the problem: on the diplomatic front, the international front and the home front.

On the international front it has launched an all-out campaign to convince the world community that it should be recognized as the Republic of Macedonia. It showed complete intransigence to any names proposed by Matthew Nimitz, the UN appointed mediator and continued and continues pushing for nothing less than complete recognition as the Republic of Macedonia while paying lip-service to the Interim Accord.

On the home front it has mobilized its educational system from kindergarten to university in the teaching about “unlibertaed brothers in Greece” and in painting Greece as its heinous enemy. This reached a pinnacle when in April 2008 photographs of Greece’s Prime Minister Kostas Karamanlis in a Nazi uniform were distributed widely.

FYROM’s internal and external policies were examined in detail in Macedonianism: FYROM’S Expansionist designs Against Greece after the Interim Accord, (1995). Iakovos D. Michailidis, Assistant Professor of Modern and Contemporary History at the Aristotle University of Thessaloniki shows FYROM trying to do nothing less than to re-write history to suit current political needs, to promote territorial claims against Greece and to create a national mythology based on Greece’s cultural legacy. So much for the provision of the Accord that “Each Party undertakes to respect the sovereignty, the territorial integrity and the political independence of the other.”

The issue came to a head in April 2008 when FYROM attempted to join NATO. They had a powerful advocate and supporter in President George W. Bush and the FYROM delegation went to the Bucharest Summit assured of success. Greece had made it perfectly clear that it intended to veto FYROM’s application. Many thought that American and some European pressure would prove too much for Greece. It did not and FYROM was not invited to join NATO. The fury of the FYROM and American delegations was palpable.

While continuing its efforts on the diplomatic, international and home front (including ads in major newspapers and CNN) FYROM has decided to take another approach: an Application to the International Court of Justice for an order forcing Greece to withdraw its objection to NATO’s invitation to FYROM.

FYROM’s argument is based on the wording of the Interim Accord, which states that Greece will not object to FYROM applying to join international organizations. Greece in fact only “reserves the right to abject to any membership.” As mentioned above, Greece has not objected to FYROM joining a large number of such organizations until the NATO issue came up. Greece’s position seems to be that “enough is enough” If the name issue is not resolved FYROM can stay out of NATO and out of the European Union.

Greece has not filed a reply to the Application. The Court ordered FYROM to file its legal memorandum by July 20, 2009 and it has done so. Unfortunately I have not received a copy of it for review. Greece has until January 20, 2010 to file its reply.

In the meantime, the war of words continues and FYROM continues to identify itself as the Republic of Macedonia except when forced to do the opposite. At the opening of the Olympic Games, for example, its athletes enter the stadium under the letter “f”. Despite thumbing its nose at Greece and the UN, FYROM wants to appear as the aggrieved party and is going to the ICC asking the Court to make Greece behave. Once again, it wants to have its cake and eat it too.
Posted by James Karas at 12:55 PM

Email ThisBlogThis!Share to TwitterShare to FacebookShare to Pinterest
Labels: COMMENTARY