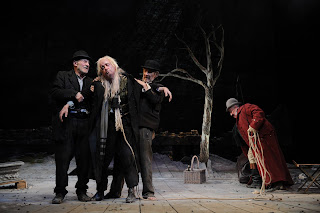 Estragon and Vladimir, Samuel Beckett’s pair of tramps, have been Waiting For Godot since 1953 and tantalizing scholars and audiences. One can see or read the play repeatedly and find new meanings or no meaning at all as the two men do nothing and have nothing to do but wait for the mysterious Mr. Godot who will save them if he ever comes. Save them from what and to what is one of the many mysteries of the play.

Waiting for Godot can be a very entertaining play with the right actors and the right director. It is actually quite funny as well as intriguing and, if you will, confusing. Many actors have tried their hands at the play but few can match the talents of the present stars doing the play at the gorgeous Theatre Royal Haymarket in London. With Ian McKellen as Estragon, Patrick Stewart as Vladimir and Simon Callow as Pozzo you have thespian talent that would be difficult to match.

This is a landmark production that will no doubt be remembered by those who saw it. McKellen’s Estragon is an old and rather nasty man. He has a deep and sonorous voice that makes every word resonate. Estragon shuffles across the stage but can get fairly energetic when necessary. He looks as if he has been around for a very long time and one of his few choices in life, if that’s what it is, is to hang himself from a tree if only he had the means.

Stewart’s Vladimir is far spryer. He dances and sings and hops about. Of course, he is no less desperate than Estragon. Stewart’s lighter voice is a perfect foil for McKellen’s mellow bass and the two make an unforgettable pair. Simon Callow does a superb job as Pozzo. Ronald Pickup is the hapless Lucky who gets to stand on stage most of the time but he does get his moments of superb acting.

The detailed movements and vocal intonations that we get for every line are the work of director Sean Matthias. He seems to have stage-managed the whole thing with meticulous care and the result is undeniably superb. Interestingly, the play is supposed to take place on a country road with a barren tree.

This production is set in a city that has been bombed or destroyed to pieces. There is a huge wall standing in the background but the foreground shows destroyed buildings. The rock of the script is in fact the cupola of a pillar. The wall has a door and this was at one time, perhaps recently, perhaps in the distant past, an inhabited place.

Stephanie Abrahams wheels herself into the office of Dr. Feldmann. He is listening to some virtuoso violin playing on his fine stereo. So begins Tom Kempinski’s brilliant play Duet for One now showing at the Vaudeville Theatre in London. It is a two hander and Juliet Stevenson’s performance as Stephanie is worth the trip to England.

Stephanie and the psychiatrist will meet over six sessions. We will start with the self-confident virtuoso violinist who has been struck with multiple sclerosis at the height of her career and end up with a degraded human wretch on the verge of suicide.

Stephanie thinks that she can cope with MS by her strength of character: she will do things, teach and run her husband’s business.

These hopes and plans prove illusory and she blames the doctor as her condition deteriorates and fissures develop or appear in her life. She becomes embittered as she delves into her past, looks at the present and tries to imagine the future. She degenerates into not bathing and having casual sex with a junk dealer. He picks up scrap metal and she is reduced to buying metal in order to give him a reason to visit her.

The play depends almost entirely on Stevenson’s riveting performance. She deteriorates in front of our eyes and we see an actress who can deliver fear, pathos, courage, despair and stinging remarks with surgical accuracy. Henry Goodman is in the unpleasant role of being the straight man. He does get a dramatic scene where he defends himself and his profession and gives a superb performance.

Kempinski does not provide an answer to those afflicted with MS. Abrahams is not an ordinary person. She is a supreme artist for whom music is life and life is or was music. When the doctor suggests an endless number of things that she can do she recalls that her father tried the same approach when he was trying to dissuade her from taking violin lessons. The father and the psychiatrist become in her words “employment agencies” to a woman who knows no employment.

An unforgettable performance.
Posted by James Karas at 3:43 PM