The Red Priest (Eight Ways To Say Goodbye) is a play by Canadian playwright Mieko Ouchi. It was her first full-length play and it premiered in 2003. The Guild Festival Theatre of Toronto, in its 11th season,  has produced this intricate and delicate play with considerable success.

The Red Priest of the title refers to the composer Antonio Vivaldi who in fact had red hair and was an ordained priest. The only other character is simply called The Woman. She is a French aristocrat in Paris in May 1740 during the reign of Louis XV.

David Whiteley gives a superb performance as Vivaldi, the priest, the outstanding composer, the consummate violinist and man-about-town that all women pined for. He knows he is different and better than anyone in society and that lends him some arrogance but he also has to deal with aristocrats and he must needs be humble or pretend to be in front of them. At times he even has to grovel to The Woman. 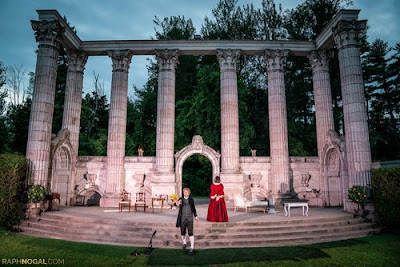 Sierra Haynes as The Woman is a creature of another world, the world of the wealth and nobility. Her head held high, her nose up in the air, we might say, she exudes hauteur and high-class manners but she wants to please her husband and and thinks that learning to play the violin is one way of doing it.

I should note that the play is as much a series of monologues by the two characters and of course dialogues as it’s a concert of  Vivaldi’s music. We hear samples of a wide variety of his works and leave the theatre with his music in our ears. The good audio system of the Guild Theatre made listening to the music an extraordinary pleasure.

The woman tells us that she thinks of her husband and his ambition to create the perfect garden. We see Vivaldi is with a prostitute, drunk, telling her that his playing is so extraordinary that people think his talent comes from the Devil himself.

Both have more than one list of eight ways to say goodbye. But more importantly she wants to please her husband who is willing to become Vivaldi’s patron. Would he compose something in humour of her husband? Could he teach her to play the violin? Can he teach her to play well enough in six weeks for her to play for the Court? He has made a bet with the King about her ability to learn and perform. These are high stakes. 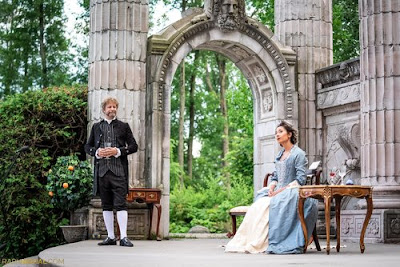 The dynamics of the relationship between the aristocratic Woman and the lowly violinist change to teacher/pupil because he is in control now and dictating to her how to play the violin. There is friction between them and they both hate what they are doing. He wants patronage and has descended to instructing the Woman something for which she may have no desire or talent. He is desperate for money.

The Red Priest is replete with references to painting, Greek mythology and the music and especially operas of Vivaldi. The relationship between Vivaldi and the Woman changes in wonderful and moving ways. They reach out to each other through music, performance and art. It becomes beautiful human contact in a beautiful play that is done well by Haynes and Whiteley under the judicious direction of Helen Juvonen.

The Guild Festival Theatre performs outside, under the columns of the Greek Theater in Guild Park & Gardens in Scarborough. There is no set to speak of and the threat of a thunderstorm the evening that I attended prevented them from putting what little they have. The Greek columns are very forgiving and the play flows well.

A concert of Vivaldi’s music and a lyrical, subtle intricate and moving play about a famous composer/violinist and an aristocratic lady is a pleasure to see and hear.