The Glimmerglass Festival has created a tradition of offering something old, something new and something familiar, usually a Broadway hit. This year’s old is Georges Bizet’s classic chestnut Carmen. There is a Double Bill of one-act operas already reviewed by me and the other productions are coming up.

Carmen, directed by Denyce Graves and designed by Ricardo Hernandez is a mixed success but it does build up to a superb last scene earning it a standing ovation.

Let’s start with one of the most iconic characters in opera – the cigarette girl Carmen. Describing her as a femme fatal is not doing her justice. She is a free woman, a man-eater, a temptress and a sexual magnet. Any singer taking on the role must face those demands which come after the vocal prowess she must command. 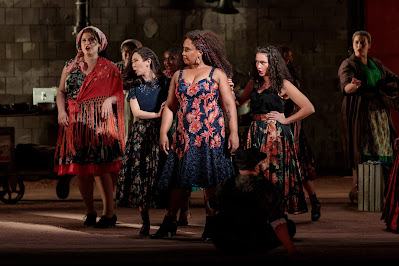 Mezzo-soprano Briana Hunter does have the requisite voice to carry the role. She does the Habanera, the histrionics, and the vocal gymnastic that Bizet demands. But Carmen needs more than that. Sexual allure is expressed with body movements and suggestive dances that can indicate as they say vertical movements of horizontal intent. Hunter cannot dance and she settles for raising her hands in the air and doing a few awkward moves. She is not a complete Carmen.

Ian Koziara was scheduled to sing Don Jose but was replaced by tenor Mathew Pearce, a member of the Young Artists Program. I hesitate to be critical of his performance under the circumstances. He has a powerful and expressive voice and a future in opera. I will leave it at that.

Soprano Symone Harcum has the juicy role of Micaela and all she has to do is sing beautifully, be pure and floor Don Jose when she tells him about his mother. She almost brings the house down when she sings “Je dis que rien ne m'épouvante” (I say that nothing frightens me). She may not be the ideal Micaela but she rises to the occasion when she must and we do enjoy what she delivers.

Richard Ollarsaba gives perhaps the best overall performance of the production as the toreador Escamillo. With a pirate’s patch over one-eye, he expresses machismo and self-assurance and sings his signature arias with exceptional bravado, vitality and clarity.

Carmen is set in Seville where we meet some bored soldiers in a square. But the soldiers in this production wear black uniforms with bullet-proof vests. Many of the women wear slacks and if we are to guess the time of the action and the location we may choose, say, present day Wisconsin as well as anywhere since there is no paraphernalia to tell us where we are. We will just go along with the story.

The sets for the square in Seville of the first scene, Lillas Pastas’ tavern that follows, the thieves’ lair in the mountains and the final encounter outside the stadium are economical workmanlike and acceptable. One needs to be sensitive to financial constraints, no doubt.   I have no doubt that the march of the children to a sprite marching tune in the opening scene has been deleted for that very reason. 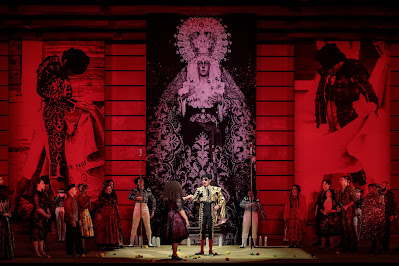 Briana Hunter as Carmen and Richard Ollarsaba as
Escamillo in The Glimmerglass Festival's 2022 production
of "Carmen." Photo: Karli Cadel/The Glimmerglass Festival
The last scene shows a large religious poster of the Virgin Mary. It requires some comments. The opera as written opens on a square in Seville where soldiers and people mill around. Bryce adds a prologue of her own. We see a dead body on the ground. A man in a black robe stands over it and some officers enter,  remove the robe and take the man away. Is it Don Jose who just killed Carmen being arrested? We have not met him yet and if it is Don Jose what is he doing in a priest’s robe?

In the final scene when Don Jose begs Carmen to go with him, he carries a Bible in one hand as if he were a cleric who wants to save her soul. In the first scene of the opera, Don Jose tells us that he is a Christian and had thought of going into the priesthood but civilian life distracted him from doing it. Is this the justification for Don Jose appearing in priestly vestments in the first scene and carrying a bible in the last scene?. His passion for Carmen is human and what Graves brings in is at best clumsy and not exactly  supported by the libretto because it tries to raise Don Jose above the human.

When you are watching the opera, you are not picking up details like that especially in the final scene. We see Don Jose’s overwhelming passion catapult him into strangling (no knife here) Carmen in an emotionally and sexually charged scene. It got a standing ovation.

Carmen by Georges Bizet opened on July 16 and will be performed in repertory ten times until August 21, 2022, at the Alice Busch Opera Theater, Cooperstown, New York.  www.glimmerglass.org

James Karas is the Senior Editor - Culture of The Greek Press. This review appears in the newspapaer