On the shores of Lake Otsego, in the lush greenery of the rolling hills of Central New York State, a stone’s throw from Cooperstown, there is a hidden gem. It is The Glimmerglass Festival which produces an eclectic selection of operas and musicals every summer. In its 49th season, it offers four main productions: The Sound of Music, Carmen, Tenor Overboard and a Double Bill of one-act operas, Taking Up Serpents and Holy Ground.

If you have been to the Festival, you do not need my recommendation. If you have not, you probably know that the Baseball Hall of Fame is in Cooperstown. If you do not want to appear hoity-toity to your sports-minded friends, pretend you are going to the Hall of Fame and sneak in a couple of operas. You can even buy some baseball memorabilia from Cooperstown’s only street which has 5000 stores selling baseball souvenirs. (So, I exaggerate. Sue me.)

The two one-act operas under review have serious religious connections. Taking Up Serpents is about a dysfunctional family of a Pentecostal preacher. The libretto by Jerre Dye includes visions, flashbacks and dreams leading to a mysterious conclusion of the work. A guide to the opera comes from the Gospel of Matthew which speaks of signs that “will drive out demons” in those who believe in Jesus, the believers will speak in tongues and “they will pick up snakes with their hands; and when they drink deadly poison, it will not hurt them at all; they will place their hands on sick people, and they will get well.” Mark 16:17-18.

Kayla (Mary-Hollis Hundley) left her parents because she was mistreated by her father, a firebrand preacher in Appalachia. He is called Daddy in the opera (sung by Michael Mays) and true to scripture he picked up snakes and was a fearless if flawed man. He is dying in a hospital bed and his wife Nelda (Jacquelyn Matava) informs Kayla. 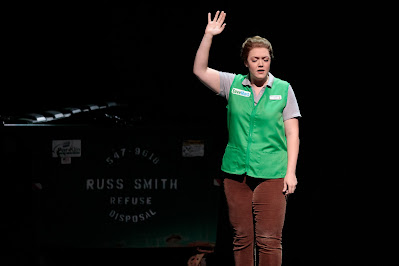 Childhood memories return to Kayla of her father’s extraordinary talents as a preacher, of his snake handling and of his belittling her as a weak woman “weak as water and weak as Eve.” Her mother sings “in tongues” quite beautifully and we get a sample of the religious excitement and fervor that  can be aroused by a Pentecostal preacher.

The singing by the three principal characters is good with some major flourishes demanded of Hundley and Mayes.

Composer Kamala Sankaram has written some brilliant music that has some lyrical passages and some stentorian moments. Like much of modern music it is difficult to appreciate or pin down all its layers on a first hearing. Conductor Lidiya Yankovskaya conducts the the Glimmerglass Festival Orchestra is a spirited performance.

Holy Ground by Damien Geter (music) and Lila Palmer (libretto) was commissioned by The Glimmerglass Festival and received its premiere performance on July 29, 2022. It gives  a serious/comical version of the search for a woman worthy of giving birth to the Son of God. The search is being conducted by the Archangels Azraele (Helen Zhibing Huang), Gabriel (Taylor-Alexis Dupont), Raphael (Jeremiah Tyson) and Michael (Joseph Goodale). They are a motley crew who must find a Messiah Suitable (MS) woman. They have been remarkably unsuccessful after approaching almost 500 eligible girls and offering the position to them without any of them accepting.

Cherubiel (Jonathan Pierce Rhodes), the newest Archangel, joins them and they surf the internet. Mary (Jasmine Habersham) seems suitable but she is about to get married and her mother Ann (Alyson Cambridge) wants to see her settled with  a good husband.

The Archangels almost give up but they pursue their mission. A couple of dreams, and nightmares provide some help and Mary is finally convinced that giving birth to Jesus is not a bad idea. The comic acts of the Archangels are contrasted with Mary’s nightmares and dreams and her progression towards accepting the position of becoming the Mother of God.

The final words of Cherubiel, who greets her when she wakes are the solemn announcement “Hail Mary, full of grace.”

The same comments can be made about Damien Geter’s music as for Sankaram’s, some fine, some difficult to understand, all needing to be heard more times.

Chloe Treat directed both operas and the sets were designed by James F. Rotondo III with the costumes designed by Trevor Bowen.

Producing modern operas is a leap in the dark and an act of courage by an opera company. The opera audience is generally conservative and prefers the standard and well-worn repertoire. That is wrong. Kudos to The Glimmerglass Festival for promoting modern works and for training performers and artists to produce them.

Taking Up Serpents  by Kamala Sankaram (music) and Jerre Dye (libretto),  and Holy Ground by Damien Geter (music) and Lila Palmer (libretto) opened on July 29 and will be performed  seven times under the title Double Bill until August 20, 2022, at the Alice Busch Opera Theater, Cooperstown, New York. Tickets and information go to: www.glimmerglass.org

James Karas is the Senior Editor - Culture of The Greek Press.