Arthur Miller’s The Crucible is the type of play that you can know by heart and yet react as if you had never seen it before when you watch the next production. You want to know what the director and the cast bring to the production but when you watch the play you get absorbed in the plot as if have no idea how it will end.

The Crucible, for those who have never seen it, is about the witch trials in Salem, Massachusetts that took place in the spring and summer in 1692.   A few hysterical girls’ accusations of witchcraft turned into a hunt for a satanic conspiracy to overthrow the theocracy of the little town. There is no shortage of witchcrafts but Miller was living through the McCarthy witch hunt of the 1950’s when he wrote the play which premiered in 1953. 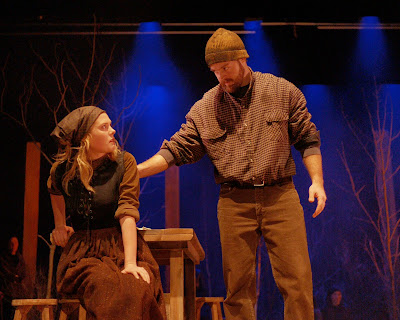 Melissa Taylor as Elizabeth Proctor, Jon Berrie as John Proctor.
Photo: Scott Gorman
The current production at Hart House Theatre directed by Michael Rubinstein has a fine cast and an imaginative and highly effective take on the play. Rubinstein and his production team set the play in a dark and forbidding milieu at the edge of civilization. Trees are visible and we know that there and beyond lie more darkness, the unknown and the ominous.

The production opens in the forest with some children dancing furtively and aware that what they are doing is, at the very least, not permitted. The scene is not in the play but an addition by Rubinstein.

The forest or the edge of civilization is always visible. The scenes in the homes of Reverend Parris, John Proctor, the Salem meeting house and the cell in Salem jail are only indicated. Some of the characters are usually visible in the background, in the darkness of the forest. The play takes place in specific places but also everywhere in the hysterical minds of most people who see Satan everywhere and want to eradicate him.

John Proctor (John Berrie) is the tragic figure of the play. He is a struggling farmer married to Elizabeth (Melissa Taylor). She is described as cold and sniveling and her husband committed the crime of lechery with their servant Abigail Williams (Courtney Lamanna). John and Elizabeth grow during the play from a bickering couple into people who see the evil around them, accept their fate and do not lose their humanity. Excellent performances by Berrie and Taylor.

Reverend Parris is a small minded, paranoid, hell-and-brimstone preacher. He thinks there is a conspiracy to have him thrown out and he is in constant desperation. Anthony Botelho plays the Reverend well as he fidgets, interrupts people and shows us that Parris is a small and evil man who does not have a single Christian virtue and possesses all the vices of fanaticism and superstition. 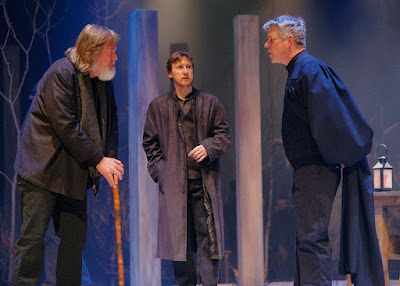 Thomas Gough, Nicholas Koy Santillo and David John Phillips. Photo: Scott Gorman
The truly evil person is Deputy Governor Thomas Danforth (David John Phillips). He has a perfect vision of Satan who is a precise operator so skillful that he can possess the soul of people and control them completely. He must be pursued and expunged mercilessly and hanging people engaged in witchcraft, i.e. possessed by Satan, is a sacred duty. Phillips displays all the self-confidence and arrogance of a man with power but without humanity in a frightful portrayal of the man of God in pursuit of God’s enemies.

The decent people of the town who are caught and destroyed in the maelstrom of hysteria are portrayed well by Thomas Gough as Giles Cory (his wife reads books). Tom Anthony Quinn as Francis Nurse and Marilyn Willock as Rebecca Nurse. They place weights on your chest to force a confession. If you confess to being a witch, you lose your property. If you die without confessing, your children inherit your land. And there is the town’s version of Donald Trump in Thomas Putnam (Tomas Ketchum) who is ready to grab whatever acreage is or is not available.

I find the fate of Reverend John Hale almost as tragic as that of Proctor. He is a man of his time, of course, and believes that witchcraft and Satan are real and must be pursued and obliterated vigorously. He soon realizes that the hysteria of the girls is a fraud and the enthusiasm of the persecutors unfounded. He tries desperately to save people’s lives but he can do nothing about it. Nicholas Koy Santillo gives us the transformation and desperate attempts of Hale to bring humanity and reason to Salem in a fine performance.

I was transfixed by the production and waited until the final scene of the performance as if I had never seen the play before.
_________