In Simon Stephens’ play Heisenberg, Georgie, an attractive woman of forty-two, is having a relationship with Alex, a man of seventy-five. She is searching for her 19-year old son and she cannot find him. She stumbles onto Heisenberg’s uncertainty principle and explains to Alex that if you watch something closely you have no possible way of telling where it’s going or how fast it’s getting there. It seems to apply to her search for her son and to life in general.

Stephens uses the uncertainty principle as the background, brilliantly and unobruseivly, as he constructs his play that deals with the rather unusual relationship of Georgie and Alex. 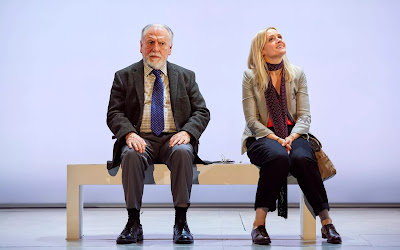 Georgie kisses the back of Alex’s neck in a railway station in London. We do not see her kissing him but a conversation ensues that leads to their extraordinary bond. She tells him she is a waitress who was previously married and has a son. She describes trips abroad and delicious foods that lead her to farway places by their taste alone. In the following scene, she tells Alex that hse was never married, that she works as a receptionist and that she has never travelled to the exotic places that she mentioned.

Alex is a articulate, musically cultured and intelligent butcher. He is reserved and has some difficuly comprehending the behavious of this vivacious and attractive woman.

Georgie finds Alex’s butcher shop and visits him there and they go out for dinner. Their relationship progresses to the point where she suggest that they have sex. They do and the relationship is maintained but there is a sense of unreality about it and everything around them. 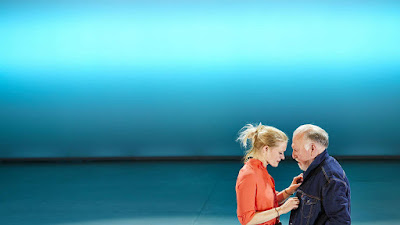 Kenneth Cranham and Anne-Marie Duff in 'Heisenberg' © Brinkhoff-Moegenburg
Heisenberg portrays a delicate and intricate bond between two people that develops accidentally  or perhaps purposefully. There is no reality because there is no certainty or uncertainty is reality and we have no way of knowing anythind different.

Anne-Marie Duff and Kenneth Cranham give nuanced, finely tuned performances as they banter, connect, love and live in a world of unreality.

Director Marianne Elliott handles the complexity and delicacy of the play with precision and care. With designer Bunnie Chistie and Movement Director Steven Hoggett, she accentuates the unreality of the play by providing balletic movements between scenes and using appropriate lighting and stage effects.

The bench, the bed, the desk and the stools used in the play are all white and they are brought up from the stage floor and disappear there when there is a scene change. The lighting suggests movement as if we were is a lab.

Werner Heisenberg may have been on the verge of developing the atomic bomb for Hitler’s Germany but that is very controversial. He did get the Nobel Prize for physics.
_________
Heisenberg by Simon Stephens ran until January 6, 2018 at  Wyndham’s Theatre, London, England.
Posted by James Karas at 7:42 PM