Bernard Shaw’s St. Joan opens famously with Captain Robert de Baudricourt screaming at his steward “No eggs! No eggs!! …what do you mean by no eggs?” The steward replies that “it is an act of God.”

That is not how the play opens in the Donmar Warehouse production seen in movie theatres in the National Theatre Live broad cast. We see three large screens and watch the business report that tells us there is a serious shortage of eggs in France and the price has gone through the roof.

Then we meet Robert and his steward and follow Shaw’s text. But will have a number of news stories as the action of the play develops. 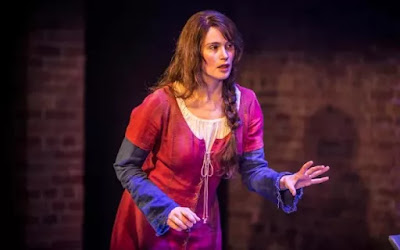 Director Josie Rourke has brought Saint Joan into the 21st century in a stunning production that makes the play seem as if it were written yesterday and makes for extraordinary theatre.

Aside from the TV screens, the dominant feature of the play is a large boardroom table set on a revolving stage. The confrontation between Joan on one side and the combined power of Church and the political authorities on the other is as relevant today as it was in 1429.

The focal point of any production must be the character of Saint Joan. Rourke directs Gemma Arterton into a believable and powerful character. She avoids making Saint Joan sanctimonious which can be almost fatal to a modern production. Arterton’s Saint Joan is strong without being haughty and humble without being servile. She must choose between her inner voices and the massive authority of the Church. She states with conviction but without arrogance that she is a child of the Church but refuses to abandon the commands of God. This is a magnificent performance by Arterton and a brilliant approach to the play by Rourke.

Shaw’s verbosity is never far off in most of his plays and we do get somewhat bogged down in the lengthy discussion among Warwick, Bishop Cauchon and the Chaplain. But that is a minor issue.

The rest of the performance is riveting and the dramatic effect struck me as if this were the first time I was seeing the play.

Some of the outstanding performances:  Jo Stone-Fewings plays the wily, unscrupulous and powerful Earl of Warwick who wants to capture and execute Joan. Niall Buggy plays the Archbishop of Rheims, a bulldog of a man, a cleric in name only, who, like the other clerics, wants to protect his power and by extension the total authority of the Church. Less obnoxious but equally authoritarian is Elliot Levy as Cauchon, the Bishop of Beauvais 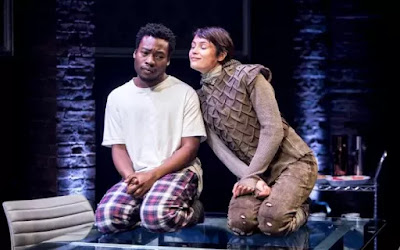 Fisayo Akinade and Gemma Arterton in Saint Joan
Fisayo Akinade plays the Dauphin, a pathetic weakling who objects even to wearing the coronation robes because they were too heavy.

The Inquisitor (Rory Keenan), the English Chaplain, John de Stogumber (Richard Cant) and the rest join forces and accuse Joan of being a witch, a heretic, a potential destroyer of the power of the nobility and most importantly a disobedient servant of the Church. They are protecting nothing more than their supremacy and authority over people and God and religion are the tools that they use godlessly and brutally.

Some may argue that Saint Joan in the 15th century, Shaw in the 20th century (the play premiered in 1923) and Josie Rourke’s production in the 21st century constitute a statement about women’s rights. I think not. The play is about totalitarian control of people.

This is a brilliant interpretation of the play with superb performances.
_____
Saint Joan by Bernard Shaw was shown at various Cineplex Cinemas on March 12, 2017. For more information visit:  http://www.cineplex.com/
Posted by James Karas at 3:53 PM