The Metropolitan Opera has sent Willy Decker’s inspired production of La Traviata around the world live from the Met once again. Decker directed the opera for the Salzburg Festival in 2005 and it was shown in movie houses Live from the Met 2012. It is a production that rates the word masterpiece.

Decker almost reinvents the opera as he focuses on the characters in the tragedy which is performed on an almost bare stage with the most prominent feature being a huge clock. It is the perfect symbol for Violetta, the courtesan pursued by many but loved by none, who is under sentence of death to her illness and the clock is ticking towards her final demise. 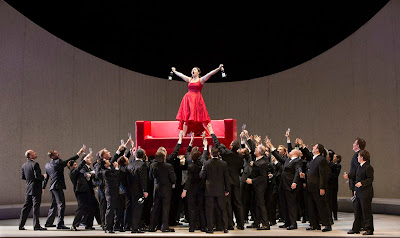 Sonya Yoncheva as Violetta in Verdi's La Traviata. Photo by Marty Sohl/Metropolitan Opera.
When the curtain opens, we see an empty stage and during the overture Violetta (Sonya Yoncheva) stumbles towards a forbidding old man with gray hair wearing a black coat. He will appear a number of times throughout the performance. In the final scene we will see him as Dr. Grenvil (bass-baritone James Courtney), the sympathetic physician who attends on Violetta, but that is not his real role in this production.

He struck me as being Charon, not just the ferryman who took souls across the Styx in Greek mythology, but the being who takes the souls of people from their deathbed. The mysterious figure in Decker’s interpretation of the opera may be the personification of death but I prefer to see him as Charon who waits for Violetta’s time on earth to run out so he can take her soul.

There are many splendid touches by Decker that illuminate the opera. The guests at the party in the opening scene are all men. Even her friend Flora (mezzo soprano Rebecca Jo Loeb) is turned into a pants role. Violetta has no friends, only clients.

For the second act scene in the country, the five couches that are all the props on stage are covered with brightly colored fabric and Violetta and Alfredo wear housecoats that match the couch covers. This is domestic bliss. They are happy, playful and in love. Charon is nowhere to be seen and the clock that is ticking towards Violetta’s death is covered.

When Giorgio Germont appears and wrecks the couple’s happiness, the couch covers are removed and the clock is uncovered to continue its relentless pace. 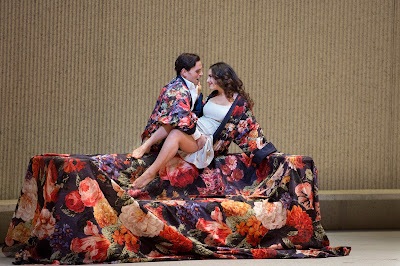 Michael Fabiano and Sonya Yoncheva in La Traviata. Photo by Marty Sohl/Metropolitan Opera.
Yoncheva makes an astounding Violetta. She presents a tough exterior and knows that being a courtesan will not allow her the luxury of a conventional love relationship and she is equally aware that her death is imminent. But all of that goes by the board when Alfredo declares his love and proves his devotion to her. Yoncheva has a plush voice that evoked her character with splendor. The final scene where she knows she is about to die and Charon is right there to take her soul is extraordinarily moving. The clock disappears, Charon pulls back because he probably has her soul and she finds peace and almost apotheosis as we ache with sorrow at her fate.

Michael Fabiano as Alfredo makes a perfect match for her. He is tender, fragile, shy and the perhaps the type that would fall madly in love with a beautiful courtesan. This Alfredo is believable because a strong personality would more likely use Violetta as a paying satisfier of his ego and lust rather than desiring her as a wife. A clue to his character is given by an incident when he is with his father. When Alfredo resists his father’s imploring, the latter hits him across the face so hard that he knocks him to the floor.

Baritone Thomas Hampson has sung the role so many times that he can do it on automatic pilot. He does not. He is effective both in his vocal output and as the conniving father who is prepared to use emotional blackmail and violence, and as a sympathetic father and eventually friend to both Alfredo and Violetta.

Matthew Diamond directs the performance for live cinema with in measured camera shots that allow us to see the performance. He does not think La Traviata is a video game and it is a pleasure to watch a sensibly directed broadcast.

Nicola Luisotti conducts The Metropolitan Opera Orchestra in this defining production of the perennial favorite.
____

La Traviata by Giuseppe Verdi was shown Live in HD from the Metropolitan Opera on March 11 and there will be encore broadcasts on April 15, 17 and 19, 2017 at various Cineplex Cinemas. For more information visit www.cineplex.com/events