Hart House Theatre treats us to a remarkable production of Morris Panych’s 1989 surreal play 7 Stories. It is done by a group of young actors and a production team which display amazing talent.

As you enter the theatre you see a man holding an umbrella standing on a ledge of a high-rise building. He is clearly contemplating suicide. He stands mostly still until the lights go down in the auditorium and the performance begins.

There are half a dozen windows behind the unnamed Man (Brian Haight) and he will interact with about a dozen people that will pop up from some of the windows. If we assume that the Man is on the edge both physically and metaphorically or, to put it crudely, nuts, it is nothing compared to the people that he meets. 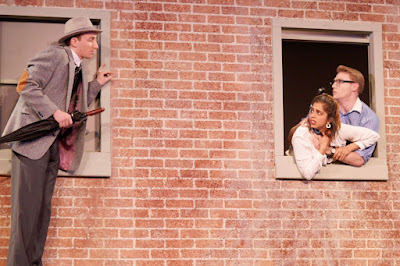 Brian Haight as The Man, Rakhee Morzaria as Charlotte, Scott Kuipers as Rodney
The Man at the beginning is mostly a sounding board for some of the lunatics that pop out of the windows but eventually he is allowed to speak about himself and gives a reason for being on the ledge. Haight plays the Man as a reserved and at times stone-faced being who appears far more rational than the other loonies of the play.

The first intruders into the Man’s encounter with his chosen fate are Rodney (Scott Kuipers) and Charlotte (Rakhee Morzaria). They are having an affair. Rodney is a lawyer, Charlotte is a poet and he is trying to kill her. They argue violently and Morzaria gets some great lines and gives a superbly histrionic performance. Kuipers does well as almost her straight man. Morzaria has another juicy role as the one-hundred-year old Lillian. She changed the life of a Frenchman with the only French that she knew which turned out to be “the grapefruit is on the table.”

Kuipers gets more scope for his talents as Michael, the obsessive artist who distinguishes between a shade and a tint. Good work by Kuipers in portraying the punctilious and sensitive appreciator of colour who, like everyone in the play, has loose hinges.

Nicole Hrgetic plays Michael’s partner Joan and the sadistic Nurse Wilson who loves people but can’t stand individuals and has no feelings but is humanitarian. Good work by Hrgetic. 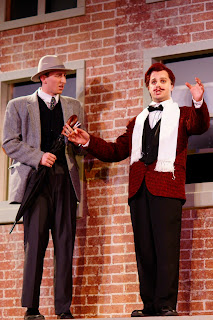 Brian Haight as The Man, Kevin Forster as Marshall


Kevin Kashani plays the psychiatrist Leonard, one of the more bizarre characters in the play.  Leonard works in a loony bin (his words) and he is completely crackers. Kashami gives a splendid portrayal of the psychiatrist who needs a psychiatrist fast. Kashami also play Percy, a guest at a party on the floor, who is as batty as the psychiatrist.
Kevin Forster plays Marshall and Al, two characters that are almost caricatures and require some showy acting. Marshall seems to have an identity crisis. He is a homosexual about to marry an heiress who almost ran him over, an actor who could not act and a fine character for an actor like Forster. The latter also plays Al, a man who knows how to put an end to a bad party – start a fire.

Margarita Valderrama plays the religiously fanatic Rachel (she poisoned her mother but it was an act of God) and Jennifer, the garrulous dummy who thinks it would be a thrill to jump off the ledge.

Panych has peopled the play with some fascinating and fantastic characters for actors and full credit goes to the cast and even more so to director Rebecca Ballarin for putting everything together and pulling off a successful production.

The play displays, wit, marvellous non-sequiturs and comments about the play itself. One character leaves the stage (closes her window) because there are too many pauses in the conversation. Take that, Pinter. Any number of labels can be attached to the type of play this is but your best bet is to forget branding it and just go and enjoy it.
________