Well, Spalding Gray jumped off the Staten Island Ferry in the East River and drowned on January 10, 2004. He had health problems including depression but as with any suicide it is not easy to explain why someone would take his life. Who Killed Spalding Gray may be considered a tribute to Gray or a search for an explanation or a portrait of the monologist and writer but it is a bad sign if you cannot tell what a play is about. 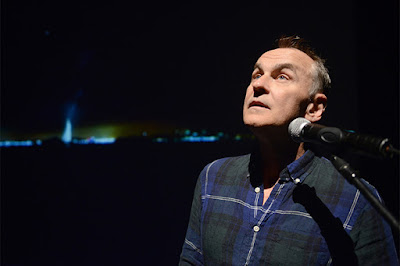 Daniel MacIvor . Photo: Guntar Kravis
Daniel MacIvor has written and performs in this 80-minute play and asks the question of the title, I guess, among other things. The set consists of a simple wooden table and chair, a microphone and a glass of water. This is very much what Gray used for some of his own monologues and the play intentionally resembles one of his performances.

When the lights go on, MacIvor invites a member of the audience on the stage and asks him “Who are you?’ the man introduces himself and turns out to be personable and humorous. He is asked “Who am I” and “Who was Spalding Gray.” In front of an appreciative audience, the opening scene goes well and so far so good.

The rest of the play is a disappointment. MacIvor weaves a number of stories in his narrative about himself, people called Howard, Don and Paul and of course Gray. Some may be true, some may be fictional and one is never sure.

MacIvor visits a “psychic surgeon” who can presumably remove an “intuitive” – a spirit or something that invades a person’s being. It takes several sessions to remove the intuitive and since I don’t understand anything about intuitive or psychic surgery, the story left me cold.

Howard considers a number of methods of committing suicide and of course there is none that is completely satisfactory. Jumping off the Staten Island Ferry into the cold waters of the East River can hardly be considered a wise choice but let’s just say that Howard is one of the recurring stories in the play that I could not quite get under my belt.

McIvor is a natural story teller and he speaks in his own voice and in the voice of Gray. He involves the audience at times and recalls the man that he interviewed at the beginning back and they even do a few dance steps.

The stories he tells unfortunately left me cold and his narrative ability and the directing of Daniel Brooks did nothing to raise the production above a mediocre night at the theatre.
_____