RUN FOR YOUR WIFE – REVIEW OF HERONGATE BARN THEATRE PRODUCTION

Dinner theaters attract relatively little media attention and it may well be the secret of their success. The Herongate Barn Theatre has been staging plays and offering dinner since 1975 and it has not lost its original shape – yes, it was a barn and still looks like a barn.

Its final production for 2016 is Ray Cooney’s classic farce Run For Your Wife. As with most good farces, even if you have not seen an actual performance you feel that you know the plot. In this case a London taxi driver has two wives and he operates with chronological and emotional precision (we assume) until the curtain rises. Then he is involved in a minor motor vehicle accident and his schedule goes haywire. 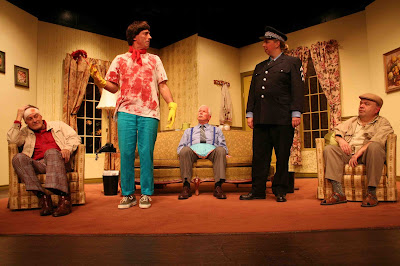 Paul Francies, Grant Evans, Don Green, Lisha Van Nieuwenhove and Chris Cole
The production of a farce places enormous demands on any theatrical company that dares to produce one. A number of doors have to be opened and shut with almost surgical precision; entrances and exits must be timed exactly, pratfalls must have accurate landings and most importantly the action must move at increasing speed and craziness so that by the end the audience is in stitches.

That is a tall order and if director Anne E. Ward does not fully succeed in the task she has nothing to apologize for in the circumstances. If she is not successful in the ultimate production of a farce, she has at least a good sitcom in her hands that kept the laughs coming and left a largely appreciative audience.

The main vehicle for carrying the comedy forward is Chris Cole as Stanley Gardener. He is a friend and neighbour of the bigamist John Smith and he receives and deflects all the issues created by the situation. Cole reacts, overreacts, overacts and is able to generate laughter at every turn of the incredible plot.

John Smith (played by Paul Francies) is the harried taxi driver who got a bump on the head in the collision and must run from one wife to the next, lie to the police and have to deal with a randy wife in the bedroom while the other one arrives in the same apartment. You get the picture. Francies’ John Smith came out as more pathetic than comic at times. I think he should have been a livelier and more convincing character who was able to persuade two women to marry him and has been able to keep them until the unforeseen accident that caused the play. In this production he could not convince us that he could get a date.

Marion Reid Clarke as Mary Smith and Rose Green as Barbara Smith do a fine job of dealing with the confusion and ensuing mayhem, Lisha Van Nieuwenhove as Sergeant Troughton and Don Green as Detective Sergeant Porterhouse played the two stock characters with ease and got the requisite laughs.

Grant Evans plays the gay neighbour Bobby Franklin with vigour and he provides the double entendre about sexual inclinations and confusion among the characters with fine effect.

For a very reasonable price, Herongate Barn Theatre provides a fine buffet dinner in a very congenial atmosphere. It does seem to be located in the boonies but that impression may have been formed by going there on one of the shortest days of the year with less than perfect visibility and there being nothing around to see.