Ross Petty is still at it. This time he fractures the story of Sleeping Beauty and evokes laughter and sheer joy from an audience that is infectiously enthusiastic. In fact there is a conspiracy between the stage and the youngsters in the auditorium that raises the level of fun to wonderful heights. Petty is listed as only the producer of Sleeping Beauty: The Deliriously Dreamy Family Musical but one feels that the writer, director and the rest of the artistic crew and cast are working under his inspiration and style or there more than that? 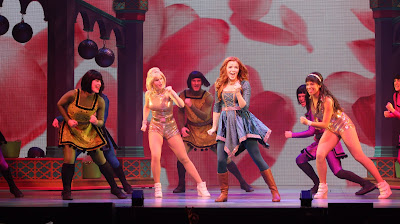 In the Kingdom of Torontonia whose skyline boasts a tower in the background a Princess is born and is named Rose (AJ Bridel). The Princess receives three blessings but also one curse from Malignicent (Hilary Farr). Boo! If she pricks her finger, she will go to sleep. Nothing is left in the Kingdom that could cause that except for the “turning table” which has a needle. Yikes. Thank goodness, I mean, how terrible, that CDs have not been invented.

Let us meet the other important members of the story. A beautiful fairy princess needs a tall, blond and handsome fairy prince, here called Luke, and James Daly fits the bill even if singing is not his strongest asset.

What we need is broad comedy and we have two terrific comic talents. Eddie Glenn as EGG (and Jacob Grimm) and Paul Constable as Sparklebum provide inspired comedy. They can act, overact, goad the audience and do almost anything with a focused aim: laughter.

Jeremy Diamond who wrote the book does not hesitate to bring current events into the story. Donald Trump, Mike Pence, toll roads in Toronto and hydro are just some of the subjects captured in the dialogue. 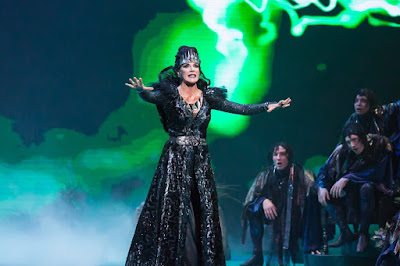 Michael Gianfrancesco’s sets and costumes are extravagantly colourful and varied. Projection Designers Beth Kates and Ben Chaisson with Lighting Designer Kimberly Purtell have to deal with storms, thunder, lightning and numerous scene changes. They produce a kaleidoscope of wonders that keep young and others admiring and applauding their work.

Director Tracey Flye drilled as much as directed the comic and musical routines with meticulous care making everything look spontaneous.

Petty did not hesitate to include commercials during the show but those too were amusing. And he did appear as Captain Hook in a brief video.

I brought Emily (“I’m going to be nine next March”), my Associate Reviewer with me in order to capture the more subtle points of the production. She was a most enthusiastic booer and cheerer with instant expressions of disapproval or approval of the bad and good characters. She found the show funny and the scenes in fairyland were her favourite.