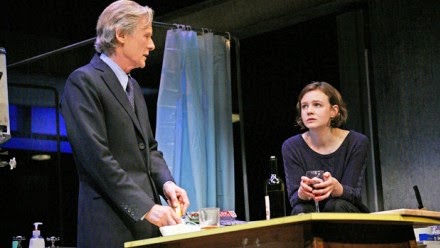 David Hare’s Skylight is a complex play that dissects an adulterous relationship between a businessman and a young teacher as well as examining incisively political, social and economic issues. It opened in 1995 and is now revived at Wyndham’s Theatre in London in a production directed by Stephen Daldry.

Tom Sergeant (Bill Nighy) is a successful businessman who rose from the bottom. He met Kyra (Carey Mulligan), an 18-year old daughter of a solicitor when he gave her a job as a waitress in one of his restaurants. She proved invaluable and became a part of his family. It was much more than that because the two of them began an adulterous relationship that lasted for six years. It ended when Tom’s wife found out about it, perhaps not at all accidentally.

The two of them meet several years after the breakup and one year after Tom’s wife has died.

Hare’s characters are convincing people but they also represent political and social views. Tom is a tough entrepreneur whose ambition is to open more restaurants, achieve greater success and make more money. His relationship with his son has deteriorated to the point where the boy left home. Tom is torn with guilt about betraying his wife and he is angry that she did not forgive him. He is a driven businessman with no introspection, almost no regard for others and a superior attitude towards those who are less successful than him.

Kyra, done superbly by Mulligan, has become a public school teacher dealing with pupils at the bottom of the social ladder. Her love for Tom was genuine and complete despite the obvious issue of betraying his wife and her friend. She believes in education and has a realistic and wholesome view of society. It is possible to live in a small, cold apartment, have some friends and not pursue or envy financial success.

The play has a third character, Tom’s son Edward (Matthew Beard), who illuminates his father’s and Kyra’s personalities by the way he is treated by them.

The personal relationships and the socio-political positions of Tom and Kyra are set out brilliantly. She has the upper hand in both of these aspects of their lives in a play that contains much humour and searing drama.

I saw the play in 1996 with Michael Gambon as Tom and Lia Williams as Kyra. The production made such a tremendous impression on me that I remember it quite vividly eighteen years later. Gambon played Tom with such tremendous power that I thought he was downright abusive. There are tender moments in the play, of course, and Tom does reveal a rather tortured side but what struck me most at the time was Gambon’s passionate forcefulness that came perilously close to viciousness.

On the other hand Lia Williams’s Kyra appeared weak, almost mousy, and showed no characteristic that would have attracted Tom to her. She stood her ground on the socio-political issues (thanks to Hare) but there was an imbalance between the two antagonists.

Nighy does not have Gambon’s forcefulness and Tom appears as a much more decent person despite his shortcomings. Nighy has a speech habit where he breaks off in the middle of a syllable and repeats it. It is a likable habit and strikes me as the speech pattern of a decent and perhaps shy man.  Perhaps director Stephen Daldry allowed Nighy to use that speech pattern to humanize Tom.

In Mulligan’s Kyra Tom has a worthy opponent who is attractive physically, emotionally and politically. She is a well-rounded human being who can love, show motherly affection for Edward and be clear-sighted about herself, the people around her and her community.

People were lined up outside Wyndham’s Theatre waiting for a ticket, any ticket, despite the fact that the “Full House” sign gave a clear message. In this case, the message was: “This is theatre at its best.”
____