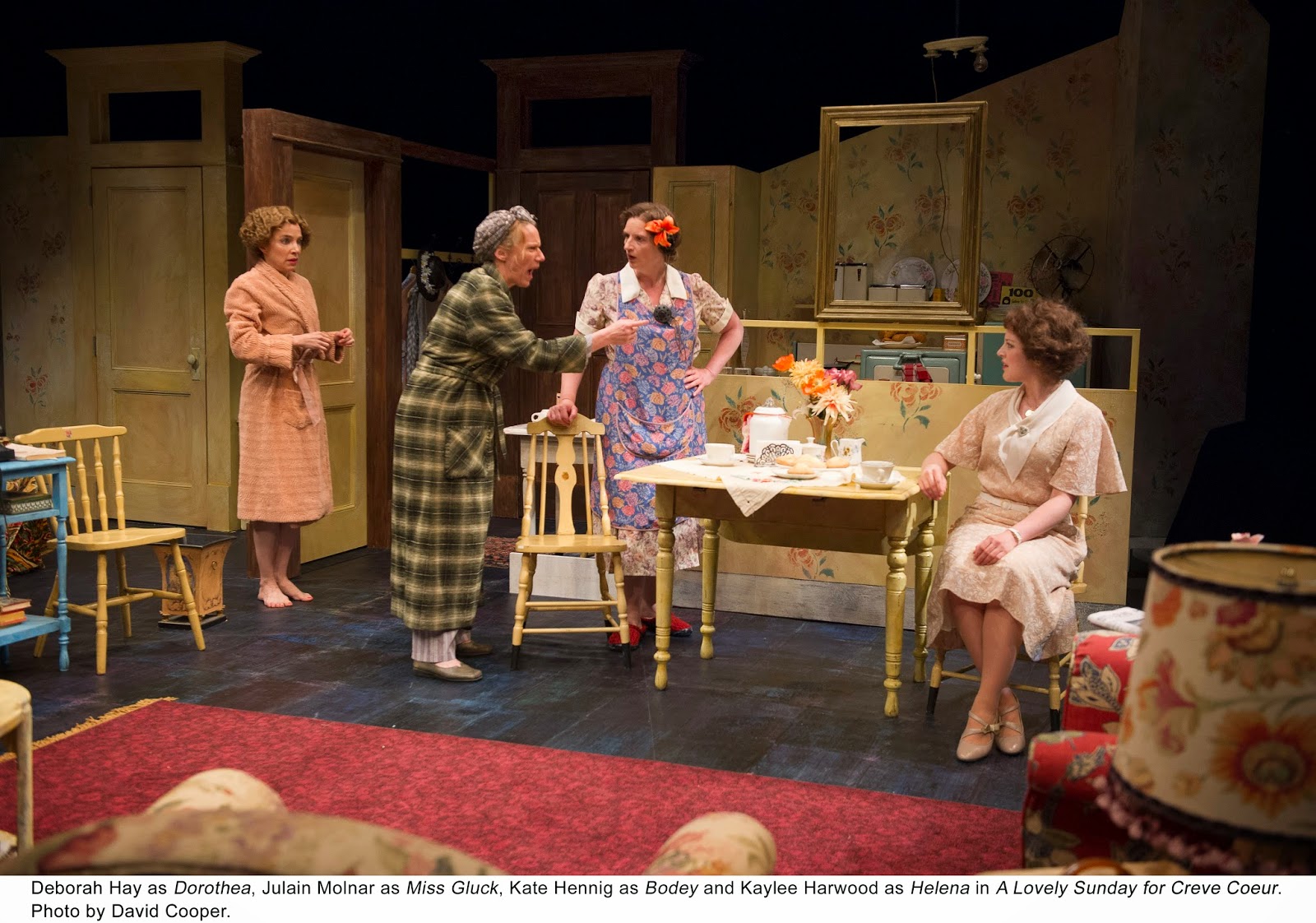 Tennessee Williams’ one-act play, A Lovely Sunday for Creve Coeur, was first produced in 1979, near the end of his career. It is a moving play and the Shaw Festival earns kudos for staging it as a lunchtime treat at the Court House Theatre.

Creve Coeur covers familiar Williams ground. Dorothea, described by the author as “a marginally youthful but attractive woman” is a high school civics teacher who is in love with the principal. She lives in a rundown apartment in St. Louis with Bodey, a hard-of-hearing spinster who wants Dorothea to marry her uncouth brother.

The two women have a German neighbour named Miss Gluck who is mourning the death of her mother and is pretty much out of it. They are visited by Helena, a haughty English teacher at the same high school as Dorothea, who wants the latter to share an upscale apartment with her. Dorothea wants to do the same in order to impress the principal, even though she cannot afford it. 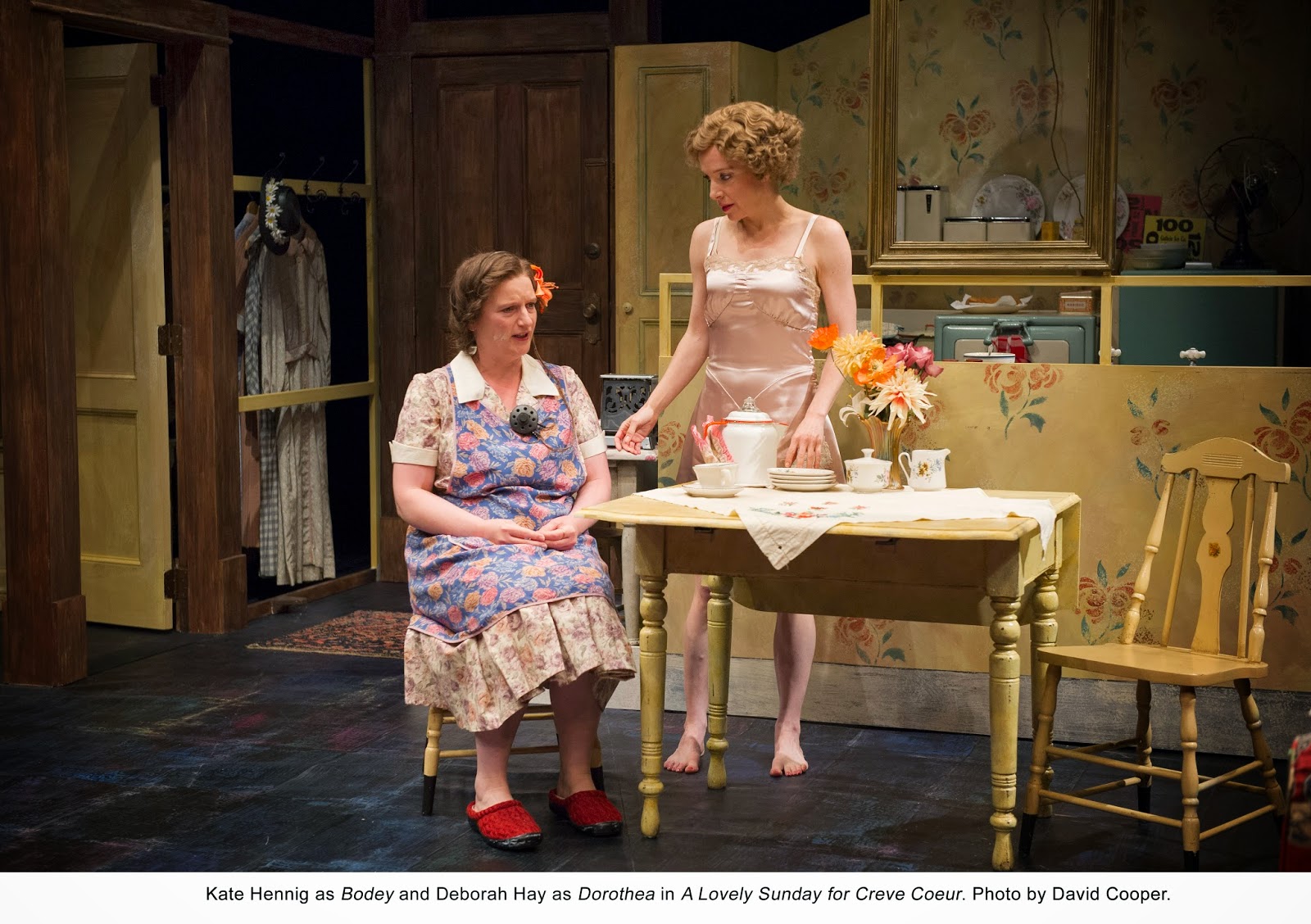 Deborah Hay gives a moving performance as the Blanche Dubois-type character, a woman seeking love and romance and living with the delusion that the principal who seduced her in the back seat of a car loves her and will call any minute. She rejects Bodey’s oafish brother (we never see him) and waits for the phone to ring. It does not because the principal is about to marry someone else and the announcement is in the newspaper. Hay captures the hope, despair and humanity of Dorothea in a superb performance.

Kate Hennig does fine work as the pathetic Bodey; plump, unattractive and in search of a wife for her twin brother. Bodey is still protective of her appearance as she puts an ugly flower behind her ear to hide her hearing aid.

Julain Molnar plays the even more pathetic Miss Gluck who visits the two women for coffee and becomes so distraught that she has an outbreak of diarrhea. Miss Gluck is a recent German immigrant and a pitiable woman like Dorothea and Bodey.

Kaylee Harwood as Helena presents us with perhaps a young version of Dorothea or a Blanche in the making. She is beautiful, fashionably dressed, and haughty with hints that much of what we see is superficial. She wants to live in a fashionable apartment but lacks the means to pay rent. Her concern with her clothes and appearance bespeaks ambition without substance.

Blair Williams directs the play with sensitivity and with Designer Cameron Porteous evokes the pitiful lives and aspirations of the four women in the stifling world of 1930’s Middle America.

Williams reworked A Lovely Sunday several times and he did not solve all the problems with it. The four women are set in a crowded apartment and he needs to move some of them off the stage for the inevitable confrontations. Refusing to come out of the bedroom, going to get dressed and a bout of diarrhea are some of the ways that Williams resorts to for separating the characters but they are not always convincing.

A Lovely Sunday for Creve Coeur is the best lunchtime treat of the year.
Speaking of lunchtime treats, how often have you craved to see three plays in one day? Very often, no doubt, but life sucks and there is a gap between craving and fulfilment. Two plays in one day is a cinch, especially in London where you can see a matinee and an evening performance in the summer every day of the week. With judicious planning you can manage three plays in one day in London but that’s in England. Well, the Shaw Festival makes that available in Canada. Like solar eclipses, three-playas-in-one-day does not occur very often. (Soulpepper did it recently – three plays in a day, not an eclipse).

A Lovely Sunday for Creve Coeur  by Tennessee Williams continues in repertory  until October 11, 2014 at the Court Hose Theatre, Niagara-on-the-Lake, Ontario. www.shawfest.com.
Posted by James Karas at 11:29 PM