THE FLYING DUTCHMAN AT GLIMMERGLASS FESTIVAL 2013 DIRECTED BY FRANCESCA ZAMBELLO 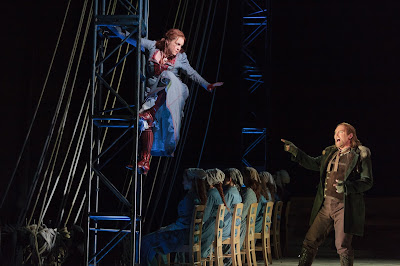 
Francesca Zambello, the Artistic and General Director of the Glimmerglass Festival, delivers a thoughtful, thought-provoking and simply brilliant production of The Flying Dutchman for 2013 season of this American showcase near Cooperstown, New York.


The Glimmerglass Festival takes note of the 200th anniversary of the births of Giuseppe Verdi and Richard Wagner by producing early works by both of them. Wagner gets the birthday cake for his 1843 opera whereas Verdi is honoured with King for a Day, equally unknown as Un Giorno di Regno.


The Flying Dutchman, like most operas, can be and has been subjected to all kinds of treatments by different directors. The question was: what will Zambello and the Glimmerglass people bring to this work. The answer came quickly, during the overture before the curtain went up. They have a great deal to offer and they in fact deliver an outstanding production.


The first indicators come during the performance of the overture by The Glimmerglass Festival Orchestra. Conductor John Keenan establishes control of the music and the orchestra and delivers a performance of sustained power and clarity. This feat is even more impressive because it is a relatively small orchestra.


When the curtain goes up, we hear the music of the violent storm but also see a woman tossing in bed. We realize that the storm and the rest of the plot are a dream sequence of Senta’s (Melody Moore). Senta is fascinated by the story of the doomed Dutchman who is condemned to sail the seas until he finds the love of a faithful woman. She wants to be that woman and she dreams of his arrival.


There is some precedent for this interpretation of the plot. In the 1978 production at Bayreuth directed by Harry Kupfer, The Flying Dutchman was presented as a figment of Senta’s imagination.


Zambello with Set Designer James Noone and Costume designer Eric Teague chooses a straightforward and very effective way of telling the story. The ship is indicated by some scaffolding and ropes that are used by the sailors. The same ropes act as the walls of Daland’s house.


The singing is first-rate starting with bass-baritone Ryan McKinny in the title role. The Dutchman is a deeply troubled man, a myth one should say, who is seeking something that can only be granted in a dream or an imaginary world. McKinny has the vocal power and coloration to make a convincing Dutchman and gives a sterling performance.


Melody Moore as Senta makes a perfect match for the Dutchman of her dreams. She is fascinated by his story while awake and we see her clutching his portrait and talking about her dreams of him. Moore has a dramatic voice that she uses to great effect.


Bass Peter Volpe is an excellent Daland. His Daland is a greedy busybody who is prepared to sell his daughter. We can credit the character with having some affection for his daughter and recognize Volpe’s singing and acting for the fine job that he does with this less than admirable personality.


Jay Hunter Morris sings the role of the hapless Erik who is a decent man and a very good tenor but still does not get the girl. A fine job by Morris.


At the start of this production, we see silhouettes of women on the ropes of a ship in the background. We also see, as I said, Senta tossing in her bed. Near the end, Senta, strangles herself in the same bed with the ship’s ropes rather than throwing herself into the sea as called for in the libretto.


We then see the same silhouette of her as in the opening scene together with the Dutchman rising above the waves. The Dutchman and Senta have found love through transfiguration.


The Flying Dutchman by Richard Wagner opened on July 6 and will be performed twelve times until August 24, 2013 at the Alice Busch Opera Theater, Cooperstown, New York. Tickets and information (607) 547-0700 or www.glimmerglass.org
Posted by James Karas at 3:31 PM