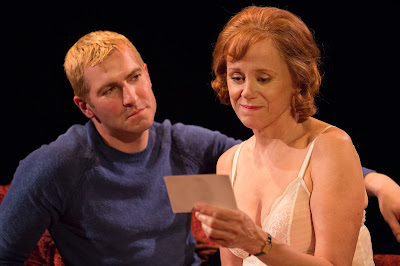 
Joe Orton wrote Entertaining Mr. Sloane fifty years ago and that may be a good reason for Soulpepper’s revival of this play. It provoked considerable outrage then but now one wonders what the fuss was about.


Brendan Healy directs a fine cast but he is only partially successful in capturing the black humour and the psychotic atmosphere of the play. The production develops slowly and comes to full life only in the third act.


Mr. Sloane (David Beazely) of the title is a lodger with Kath (Fiona Reid) and her father Kemp (Michael Simpson). He is no ordinary lodger and Kath is not an ordinary landlady. Sloane is outwardly polite but there is violence under the veneer; he may have killed someone and we wait for the real person to erupt. Beazely with short-cropped blonde hair and a muscular body exudes the characteristics of the psychopath that Sloan is.


Fiona Reid can probably get a patent for her portrayal of the dim, perhaps slightly unhinged bimbos like Kath. She (Kath not Reid) has “a past” but wants to pretend to maintaining high moral standards while seducing Sloane. Reid is funny, pathetic, manipulative and nuts. A wonderful performance.


Ed (Stuart Hughes) is Kath’s brother and like the other characters in the play, he is quite a prize. He is aggressive, pretentious and ambitious, and probably a few bricks short of a full load. Kemp (Michael Simpson), their father is equally bizarre and he becomes the catalyst for the plot when Sloane kills him.


Orton created his own world in Entertaining Mr. Sloane. The psychotic characters, the incipient violence, the manipulations, the sexual interactions and the black humour are blended to produce a world that has come to be known, for lack of a better name, as Ortonesque.


The play is staged in the Michael Young Theatre as theatre-in-the-round. There are seats on all sides of the theatre with the stage in the middle. The set, designed by Yannik Larivée, represented a sitting room with an emphasis on red.


The problem in the first two acts is that the play does not come to life, so to speak. There are some good lines of black humour and we sense the underlying violence of Sloane and the wacky side of Kath but we do not feel the play as a whole.

The whole thing jells in the final act when Sloane negotiates with Kath and Ed about his future. He has murdered their father and now needs to convince the two not to report the murder. But they both want him and reaching an agreement on the division of sexual favours can be very tricky.


The black humour, the violence and wacky world of Joe Orton come out and the production becomes thoroughly enjoyable.


Entertaining Mr. Sloane by Joe Orton opened on July 17 and will run until August 24, 2013 at the Young Centre for the Performing Arts in the Distillery District, 55 Tank House Lane, Toronto, Ontario. www.soulpepper.ca 416 944-1740
Posted by James Karas at 3:53 PM