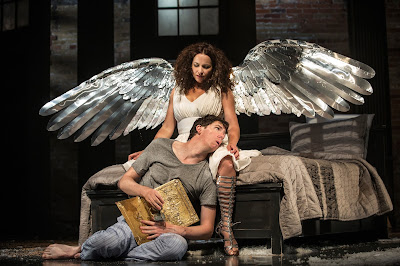 
Tony Kushner subtitled Angels in America, his two-part drama, “A Gay Fantasia on National Themes.” It is a helpful handle for approaching Part I: Millennium Approaches and Part II: Perestroika. Soulpepper has approached the plays with commendable zeal and has achieved superior if flawed results.


The two parts last about six hours and even with two intermissions each, there are longueurs. Kushner sees American society in the 1980’s through the lens and frequently miasma of AIDS and he paints a putrescent portrait. The plays abound in black humour, political commentary, and numerous historical and literary references.


There are eight actors who take on a large number of roles and their performances are simply outstanding.


Much of the action is clearly hallucinatory. Some of the most memorable hallucinations are an Angel (Raquel Duffy) being lowered on the stage and AIDS sufferer Prior Walter (Damien Adams) having sex with her; Ethel Rosenberg (Nancy Palk) appearing to Roy Cohn (Diego Matamoros), one of the lawyers who prosecuted her for espionage. There are numerous such instances of  bizarre hallucinations.


Homosexuality plays a central role in the plays and Kushner paints a horrific picture of homosexual relationships amid the rise of AIDS in the mid-1980s. Roy Cohn is one of the main characters in the drama. He is a corrupt, decayed lawyer, an influence peddler and one of the most odious people one could imagine. He has sex with men and is infected with AIDS but he denies that he is homosexual or that he has anything worse than liver cancer. Cohn bullies, screams, abuses people and presents the epitome of evil.


Joe (Mike Ross), a young lawyer is one of Cohn’s protégés and the latter tries to convince him to join the Justice Department so he can influence the Bar Association which is trying to disbar him.


Joe is a decent man who wants to play by the rules but he is a Mormon whose wife has no sexual attraction for him and he is inexorably attracted to homosexual encounters in the park. He falls in love with Louis (Gregory Prest), a Jewish clerk. Louis is a liberal whereas Joe is a Reagan republican and the political as well the homoerotic battle is joined between the two lovers.


Joe’s wife Harper (Michelle Monteith) is a valium-popping, hallucinating lunatic who “travels” the world in her psychotic mind.


Louis’s first lover is Prior but he (Louis) abandons him after Prior contracts AIDS. In Prior we see the horrific effects of the disease and much of the hallucinatory conduct. Prior thinks he is a prophet and Atkins manages to be very humorous and dramatic in the role.


The plays are a product of the Reagan administration and politics and especially political corruption in that era. Thus, we have the gay movement, national politics and hallucinatory experiences combined in an extraordinary mixture.


Despite the black humour, political commentary, hallucinations and the putrescent descriptions of the effects of AIDS, the plays do run out of steam at times. Kushner seems to be padding the plot and you wonder if two intermissions are necessary.

Albert Schultz does an exceptional job with a difficult plot that requires numerous scene changes. He eschews the temptation of having people run on and off the stage for the sake of creating hubbub. He maintains a steady hand on the steering wheel and the result is a well-done production of two plays that may well stand as a metaphor for America at the end of the last century.
____