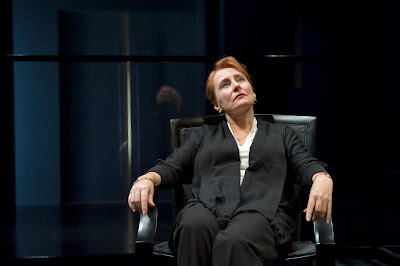 
“What could be finer than listening to a singer of tales … with a voice like a god’s? Nothing we do is sweeter than this.”

Thus spoke Odysseus when he was being feted by King Alcinous and they were listening to the bard Demodocus reciting poetry. It was one of the earliest one-man shows.

Demodocus is no longer around (if he ever existed) but the idea of one actor entertaining an audience has persisted and a fine example of that can now be seen at the Tarragon Theatre. It is The Year of Magical Thinking by Joan Didion and the extraordinary actor is Seana McKenna.

The Odyssey was recited by travelling bards with some musical accompaniment perhaps, and the performances, we assume, lasted for hours. The singers of tales had dactylic hexameters to recite some of which they composed on the spot. Seana McKenna does not have Homeric poetry on hand but she does have a superb piece of prose writing and she does not have to compose anything on the spot.

Didion was married to writer John Gregory Dunne. On December 30, 2003, during an uneventful evening at home, Dunne dropped dead from a heart attack. They had been married for some forty years and had one child. At the time their daughter Quintana was in hospital in a coma.

In the play Didion describes the process of grieving and coming to terms with the two excruciating and parallel events in her life. She is a rational, highly educated and strong woman, “a cool customer” as a hospital worker calls her, and this is not a maudlin account of grief and mourning. There is only one emotionally charged moment; the rest is an almost clinical examination of what happened to her and what she did after her husband’s death as she tried to take care of the aftermath and continue caring for her daughter.

Didion seems to have started thinking magically, it seems, soon after Dunne died. He died in New York, and she spoke with a reporter in Los Angeles. Because of the time difference, she thought that her husband was not dead in California yet and if she rushed over there she might find him alive. When disposing of his clothes, she did not give away his shoes because he might come back.

Seana McKenna as Joan Didion relates these events coolly and eloquently. She sits on a chair or moves around the stage but no more than a good lecturer will. There is some humour and some emotional modulation but most of the performance is based on the delivery of well-wrought prose written by a first-rate writer.

It all looks simple and director Michael Shamata must have had very little to do. When things work well, they look very easy. They are not.

Homer’s singer of tales did not have a director and he performed before people “sitting side by side throughout the halls feasting and listening,….the tables filled with food and drink” with a server filling their cups with wine. The Tarragon Theatre had none of that. Perhaps they should take a page from Homer and have Ms McKenna recite Greek poetry while the audience eats and drinks.

Until that happens, there is still this extraordinary combination of outstanding writing delivered impeccably by an extraordinary actor.

The Year of Magical Thinking by Joan Didion continues until December 12, 2010 at the Tarragon Theatre, 30 Bridgman Ave. Toronto, Ontario. www.tarragontheatre.com
Posted by James Karas at 3:34 PM