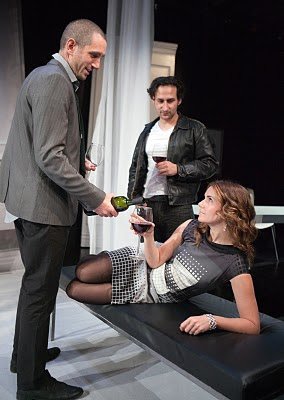 Brendan Gall’s new play, Wide Awake Hearts, now playing at the Tarragon Theatre’s Extra Space, lasts only eighty minutes without an intermission. Unfortunately it feels as if it is twice as long and provides only half the pleasure.

The basic idea behind the plot is as old as comedy or perhaps as old as the movies. A screenwriter is making a movie which involves some torrid love scenes. The female role is played by his wife. For the male lead, he casts his oldest and best friend. Well, we don’t need a crystal ball to deduce the potential problem. Will the passionate on-screen love scenes spill over somewhere that is less public?

The husband does not need an Iago to become suspicious. The problem becomes more severe and the screenwriter’s jealousy and suspicions more acute, when his “best and oldest friend” is invited to stay in the house of the screenwriter and his wife.

An additional plot complication is provided by the arrival of the film’s editor who is clearly “known” to the lead actor.

The plot, however hackneyed, provides all kinds of opportunities for high drama, low melodrama, wit, humour, even suspense. Gall could have chosen any one or a combination of these or some other mode of expression to create and hour or so of theatrical entertainment. He is not particularly successful.

First of all, Gall decides not to give names to his characters. In the programme and on the video screen they are referred to as A, B, C and D. One may charitably assume that they are types, say, Everyman and Everywoman. That would stretch charity beyond the capacity of the play to convince us that the people named after the four letters of the alphabet are representatives of more than their rather shallow selves.

A is the screenwriter, (Gordon Rand), B is his wife (Lesley Faulkner), C is the lead actor, (Raoul Bhaneja) and D is the editor, (Maev Beaty). Tom, Dick and Harriet would have served perfectly well as names and given them a greater representative aura than letters of the alphabet.

Gall seems to be highly enamored of lengthy speeches. In fact the play opens with A talking for what appears an eternity about the behaviour of a couple of four-year olds on a movie set. Is it supposed to be funny, cute, informative, interesting, decent prose, mildly entertaining, somewhat ironic? I am not sure because it was none of the above and Rand delivered it at a fast pace as if he was not sure what it was all about either. Maybe he is just nervous or neurotic and has a galloping tongue syndrome.

When D, the editor, runs into C, the actor, there is a great opportunity for some witty lines by the former lovers. If Gall tried to provide them, they all fell flat. If there was a different intention, the point of the scene simply escaped me.

The play opens and closes with the use of a video designed by Lorenzo Savoini. He wants to give the impression that we are watching one of those old, black and white Hollywood romances. I suppose the reference is meant to be ironic. The kissing in those old chestnuts was passionate mostly in the imagination and not in the superficial labial contact where pressure made up for depth.

Gall and director Gina Wilkinson do provide several rather graphic sexual encounters where much is suggested and a great deal is shown. Well done and fair enough in a play about sexual passion and suspected infidelity but we wanted a little more substance. Bhaneja and Faulkner can definitely put on a love/sex scene whether real or “pretend” and Beaty could have done a great deal with her role if she were given better lines. Rand was stuck playing the garrulous, jealous husband to no good effect.

In the programme, Gall expresses his heartfelt thanks to more than twenty people without whose help the play “could not have been written.” One wonders how much advice one can absorb from so any people and apply it to a fairly short play. He may have been much better off to ignore all of them and write a play in his own voice.
______