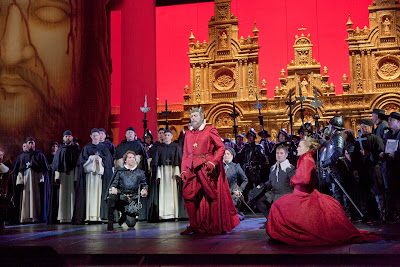 Last Saturday’s (December 11, 2010) broadcast of Verdi’s Don Carlo on large screens started at 12:30 in the afternoon and did not finish until after five. There were two intermissions but make no mistake this is grand opera in conception, execution and chronological demands. Verdi makes it all worthwhile even if New York’s Metropolitan Opera has made some serious faux pas in the assembling of an otherwise grand production.

For his 25th opera Verdi tackled some large themes and subjects that were close to his heart: political oppression, national unity, foreign domination and a few well-placed kicks in the groin of the Catholic Church. A love story is de rigueur and two ardent lovers are provided who fall in love at first sight but she is forced to marry his father!

Plot? Well, Don Carlo, the heir to the Spanish throne is madly in love with Elizabeth, the daughter of the King of France. For state reasons, Elizabeth marries King Philip of Spain, Don Carlo’s father. They still love each other despite the marital arrangements. Princess Eboli is also in love with Don Carlo and we have the perfect trio for an opera.

On the international scene, we have the oppressed Flemish people who want some elbow room. They have a champion in Rodrigo, Marquis of Posa. The Catholic Church enters in the hideous guise of the Inquisition and a few Flemish people are burned at the stake. It is all very dramatic and the perfect if somewhat overlarge subject for an opera.

The current production is by Nicholas Hytner, the Artistic Director of Britain’s National Theatre and it is designed by Bob Crowley.

For Don Carlo you need half a dozen singers some of whom need to have the stamina of vocal Marathoners with an orchestra that can deliver the richly textured music. The Met does exceptionally well in this department. Our hero Don Carlo who is rarely off stage is sung by tenor Roberto Alagna. He does an exceptional job despite the heavy demands of the role. He is still young enough to look acceptable as a hero and deserves full marks for his performance.
Our heroine is the hapless Elizabeth who finds the love of her life only to be told that she has to marry his old father for political reasons. She is the prize or price for the peace treaty between France and Spain.

Soprano Marina Poplavskaya has a fine voice and sang with exceptional beauty and vocal control. The problem with her is that she has a charmless face with disproportionately large jaws and taut skin that seems impervious to the expression of emotion. She can hardly smile and knitting her eyebrows was the height of her emotiveness.

Baritone Simon Keenlyside sang an outstanding Rodrigo, Don Carlo’s friend, who tries to be a good subject as well. Bass Ferruccio Furlanetto sings the despotic King Philip who does have one major aria of introspection, “Ella giammai m' amò!” (She never loved me!). He realizes that Elizabeth never loved him and that he will only find peace when he dies. He sings with assured sonority throughout and looks and acts his part.

If the king has at least a moment of introspection and humanity, the Grand Inquisitor has none. Dressed in the flowing red robes of a Cardinal, bass Eric Halfvarson exudes raw power and unrelenting evil. When he first appears, his hands shake as if he is suffering from Parkinson’s but Halfvarson soon forgets the Inquisitor’s illness. He should either kept it up on never started it. His shaky voice is sufficient indication of his dotage.

Mezzo soprano Anna Smirnova is a generously proportioned and powerful Princess Eboli who at one point sings about the curse of being beautiful. The Princess who is in love with Don Carlos is a nasty piece of work and Smirnova does a good job at bringing this character out.
Don Carlo opens in the forest of Fontainebleau in the winter where Don Carlo and Elizabeth are separately lost. A few trees and some snow on the ground will do and let’s get on with Don Carlo’s opening aria “Fontainebleau! Foresta immense e solitaria” where he tells us that he saw his beloved’s smile. We never see her smile but let’s not quibble. They do treat us to a great duet and we are on our way.

The rest of the sets were inept, inappropriate, invisible and downright annoying. Take the scene outside the monastery of St. Just. The chorus of ladies-in-waiting sings about a shady pine grove where a fountain cools the heat of summer. There is a reddish panel in the background and some barely visible cypress tress on the side. It is dark and dreary and one wonders what the hell were Hytner and Crowley thinking of. You can have light and colour without taking away from the seriousness of the opera.

Gary Halvorson does not help things. He is the man responsible what we see on the big screen. He has not figured out yet that the broadcast of an opera is not like playing a video game. If you keep changing shots and angles with appalling frequency you are guaranteed to get some stupid shots not that frequent changes is not sufficiently stupid in itself.

You need to get used to this idiocy and I have made some strides but am not quite there. Bad sets and bad camera angles can affect but cannot ruin a grand production and this one is decidedly worth seeing.
_____

Don Carlo by Giuseppe Verdi was shown live in theatres on December 11, 2010 and will be shown again in various theatres on January 22 and February 14, 2011.
Posted by James Karas at 11:36 AM