Edmond Rostand’s Cyrano de Bergerac is a long and unwieldy play that is rarely produced in its original form. Anglophone theatre companies must rely on one of the many translations and adaptations that are either readily available or commissioned for their production. The Shaw Festival commissioned playwright Kate Hennig to translate and adapt the play for its 2019 season. After the horrors of the pandemic, the Festival opened its doors again and has reprised that production for its 2022 season to the great relief of artists and audiences who have been locked out for two years.

Hennig helpfully informs us that the play “originally had more than forty speaking parts and more than sixty named parts.” The small stage of the Royal George Theatre in Niagara-on-the-Lake would have been seriously congested if all those characters were represented by different actors. Instead Hennig and director Chris Abraham have arranged that in this version all the play’s parts would be played by seven women and seven men. Seven of the actors play a single role each while the other seven play from two to five parts. 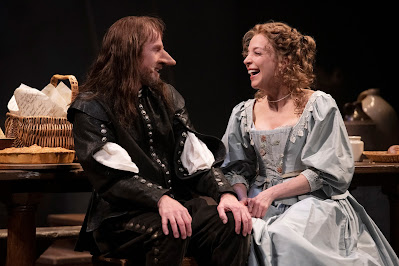 Cyrano de Bergerac may be unwieldy but it does have several virtues that guarantee its longevity on the stage. The love triangle has the appeal of myth. The ugly Cyrano (Tom Rooney) and the handsome Christian (Jeff Irving) love the beautiful Roxanne (Deborah Hay) but this triangle has a unique perspective. Cyrano is an extraordinary man: poet, philosopher, scientist and swashbuckler but is a man who never experienced the love of a woman. Even his mother hated him but he is in love with Roxane. Christian is handsome and Roxanne falls in love with his good looks and she is under the illusion that his physical features are matched by a romantic and poetic nature. She wants to be wooed with poetry and dazzled with her lover’s soul.  Christian is about as eloquent as a tree stump.

Cyrano undertakes to court Roxane for Christian with his passionate and glorious poetry. In classic mythical form, Roxanne unknowingly falls in love with the man with the exquisite poetry and great soul while imagining that she loves Christian. I think it is this primordial mythical and magical aspect of the story that draws us to the play. It does have a few memorable scenes but other than that, Cyrano de Bergerac is not a particularly good play.

If a director can find outstanding actors for the roles of Cyrano, Christian and Roxanne the success of the production is all but guaranteed. The shortcomings of the play disappear and the audience enjoys some extraordinary scenes and the retelling of a myth.

The actor playing Cyrano must show us the character’s exuberance, fearlessness, vanity and most of all the depth of his emotions, his passions and his yearning for love. The balcony scene is the heart of the play where Cyrano pretending to be Christian speaks to Roxanne in the darkness. The words, the poetry and his voice build up to a crescendo of emotion that make Roxane tremble with love. It should have a similar effect on the audience. 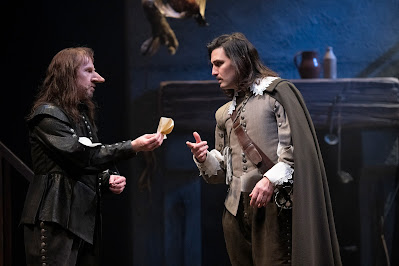 The same thing should occur in the letter-reading scene at the end of the play when Roxane realizes that the love and soul in the letters that she received were Cyrano’s and not Christian’s. She had loved the wrong man all her life.

Unfortunately, Tom Rooney did not convey the passion, the love and the pain of a lifetime in those few minutes. Hay’s reactions to Cyrano, though good, did not have the requisite push to reach the heights that were or should have been expressed in the circumstances. Irving as Christian was heroic but we did not expect much from him.

The rest of the actors were a mixed bag, sometimes failing to enunciate, at other times rising to the occasion with Patrick Galligan as de Guiche and Kyle Blair as Ragueneau deserving praise.

Julie Fox designed the set and the costumes and they did the job for the production.

To be fair I should note that the production received a standing ovation on opening night.

Cyrano de Bergerac by Edmond Rostand in an adaptation by Kate Hennig will run until May 8, 2022, at the Royal George Theatre, Niagara-on-the-Lake, Ontario. www.shawfest.com.