Ellie Moon’s What I Call Her delivers a solid punch, both physical and emotional, in its climactic scene. The play builds up to an even higher emotional apex after that with some outstanding acting by Ellie Ellwand and Charlie Gould. Unfortunately there are problems with the breadth of the play and the road to the final, enigmatic resolution.

Kyle (Michael Ayres) and Kate (Charlie Gould) are a young couple, living in a simple apartment in the Leslieville part of Toronto. They are affectionate and apparently well suited for each other. We quickly find out that Kyle comes from a very happy family whereas Kate was raised in a dysfunctional household and harbours deep-rooted hatred and revulsion against her mother and her sister. 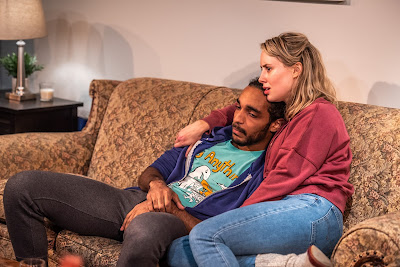 Michael Ayres and Charlie Gould. Photo: Dahlia Katz
We will soon find out that there are some serious fissures in Kyle’s ideal family but that will be only a minor sideline.

Kate’s mother is in a hospice on death’s door and Kate has started writing her obituary. As the plot develops, the obituary takes and maintains the central focus for far too long. We slowly realize that Kate in her recollection and hatred of her family may be relating events that did not happen, myths that she has created or reliving her own psychoses.

When her sister Ruby (Ellie Ellwand) appears, unexpected and unwanted, Kate’s precarious emotional balance explodes in an expression of hatred and other complex feelings about her.

The sisters go through a roller coaster of emotions about their relationship and their relationship with their mother. The mother was sexually abused as a child and was a seriously damaged human being. Her children have inherited, perhaps, her damaged personality but are largely unaware of it and blame the mother for abusive conduct, which, as I said, may have little or no basis in reality.

Gould and Ellwand display some incredible emotional intensity in their acting. Ayres as Kyle is stuck between the two sisters deflecting shocks and being treated to some abuse himself. 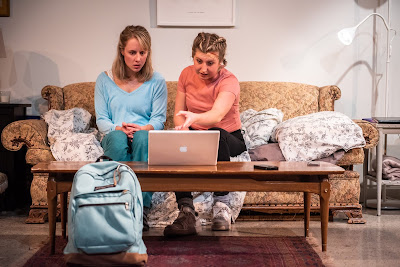 Charlie Gould and Ellie Ellwand. Photo: Dahlia Katz
The problem is that there is not sufficient objective correlative to the emotional reactions. Kate is writing an obituary before her mother is dead that she does not intend to publish. Is she doing it for therapeutic reasons, for posthumous revenge, for expiation of her feelings towards her mother and her sister? Possibly. It is a thin plot device that does not sustain the play to the heights that Ellie Moon seems to have intended.

The author, the actors, director Sarah Kitz and the creative team are all young and with the exception of Ayres and composer Ali Berkok, they are all women who show a great deal of talent. The production company In Association, was founded in 2016 with the purpose of producing Ellie


Moon’s first play Asking for It. What I Call Her is worth seeing for that reason alone and for the possibilities that it so clearly promises.
_________
What I Call Her by Ellie Moon, in a production by In Association in partnership with Crow’s Theatre, opened on November 21 and will play until December 8, 2018 at the Scotiabank Community Studio, Streetcar Crowsnest Theatre, 345 Carlaw Avenue, Toronto, Ontario M4M 2T1. http://crowstheatre.com/