Mary Poppins, now playing at Young People’s Theatre, has something for everybody but when it comes to young people, it has everything for all of them. The YPT production is a 90-minute version of the Broadway musical based on the Walt Disney film of 1964 which in turn was based on the children’s books of P.L. Travers.

Those who are of certain age or have read the books will recall that there is chaos in the Banks family in Edwardian England. Mr. and Mrs. Banks (Shane Carty and Jewelle Blackman) cannot find a nanny who will stay for more than a few weeks. They have prepared an ad for the Times. But, as if by magic, Mary Poppins (Vanessa Sears) arrives and offers her services. She comes before the ad appears, knows exactly what the Banks’ children want and need, has no references, is completely self-assured and gets the job. 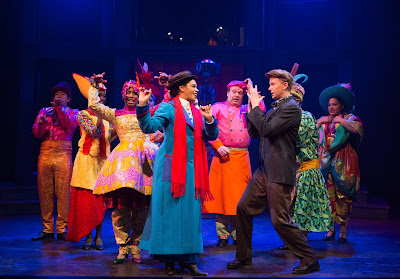 The cast of Mary Poppins. Photo by Cylla von Tiedemann.
Mr. and Mrs. Banks are disciplinarians from the old school but their children Jane (Jessie Cox) and Michael (Hailey Lewis) are a handful. Mary is a no-nonsense nanny who manages to give the children what they want. She is magical in fact and proves her mettle by producing a very long hat stand from her bag. Mouths wide open, please.

Mary appears and disappears from the life of the Banks family as we follow the plot of Mr. Banks’s difficulties with his job, the appearance of the Bird Woman (Aisha Jarvis), the routines involving Bert (Kyle Blair) and those marvelous chimney sweeps, the arrival of the nasty nanny Miss Andrew (Sarah Lynn Strange) until we find a resolution to all the problems and a happy ending.

Mary Poppins has marvelous songs that are probably familiar to most adults from the film and the stage musicals. "A Spoonful of Sugar," "Chim Chim Cher-ee," “Feed the Birds," "Supercalifragilisticexpialidocious," “Brimstone and Treacle" "Let's Go Fly a Kite" and "Step in Time" are a good sampling of the tuneful and memorable songs offered.

The disciplined and talented cast delivers ninety minutes of energy, humour and beautiful singing, and creates a thrilling atmosphere that kept young and old engrossed in the performance.

The songs go from the jolly “Supercalifragilisticexpialidocious” to the threatening “Brimstone and Treacle" of the haughty and ghastly Miss Andrew to the uplifting "Let's Go Fly a Kite” to the rousing and super-energetic "Step in Time." 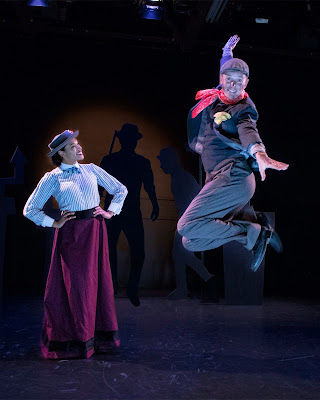 Pictured in promotional photo: Vanessa Sears as Mary Poppins and Kyle Blair as Bert
Photo by Ali Sultani.
Vanessa Sears and Kyle Blair get top honours for their superb performances. Jessie Cox and Hailey Lewis are excellent as the children and Jewelle Blackman and Shane Carty make fine parents from another generation, no doubt.

Thom Allison keeps a brisk pace when appropriate with fine variations in tone and speed when necessary. Kerry Gage’s choreography is outstanding.

The two-story set by Brandon Kleiman represents the Banks’ house and is easily converted into a street scene and even a rooftop scene for the chimney sweeps. It provides space for the musicians and is efficient and effective.

I saw the production with two of my associate reviewers, Ava (I am going to be double digit on April 2 and I am one minute older than my sister) and her twin Hannah. They gave the production and the performance enthusiastic reviews. They did not know anything about Mary Poppins before and interestingly they caught on the moral lessons of the musical. One should never give up and if you don’t try you will not succeed, they commented. They liked the reconciliation of the family when the father and the children went to fly a kite together. They liked the atmosphere of the Banks home.

They also enjoyed the magical effects and were impressed by the dancing.

With reviews like that, the only possible verdict is a command to take your children and go to see the production
___________
Mary Poppins, The Broadway Musical, based on the stories of P.L. Travers and the Walt Disney film, by Julian Fellows (book), Richard M Sherman and Robert B. Sherman (original music and lyrics0 and George Stiles and Anthony Drewe (additional songs and music) continues until January 6. 2019 at the Young People’s Theatre, 165 Front Street East, Toronto, Ontario. 416 862-2222. www.youngpeoplestheatre.ca