THE MAGIC FLUTE - REVIEW OF LIVE FROM THE MET BROADCAST

Julie Taymor’s production of The Magic Flute for The Metropolitan Opera which was transmitted worldwide on October 14, 2017 tries to be a magical, fantastic staging with extensive use of puppets and some high tech. Many of the things she does smack of an overreaching attempt to entertain children and some of the other aspects of the production with the emphasis on darkness made the production seem heavy-footed.

Taymor, in addition to directing, also designed the costumes and, with Michael Curry, she designed the puppets. In other words this is a Julie Taymor production through and through. It premiered in 2004 and seems to have staying power. 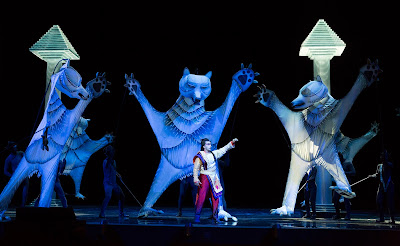 Charles Castronovo as Tamino in Mozart's "Die Zauberflöte."
Photo: Richard Termine/Metropolitan Opera
The use of puppets and the necessary presence of puppeteers was so extensive that I found it rather tiresome. Some of it was effective, like the huge dragon which threatens Tamino in the opening scene. The Three Ladies (soprano Wendt Bryn Harmer, mezzo Sarah Mesko and mezzo Tamara Mumford) appear dressed in black with blackened faces sporting puppet heads (or are they skulls) on their heads. The heads can also be held in their hands.

The Three Spirits are all white in contrast to the Three Ladies, I suppose. They have spiked white hair, white underwear that could be diapers and white beards that reach to below their knees. They commute on the back of a goose or perhaps the skeleton of a goose. When the Queen of the Night sings her famous aria, there are banners (her head gear) twirling around her head. She hits her high notes and gets rousing approval from the audience and should be left to sing without extraneous tricks.

There are numerous birds, monsters, bears and other creatures that fly around the stage. Even so, the emphasis is on darkness which no doubt is meant to make the emergence into light by our hero Tamino and heroine Pamina all the more pleasant. It does not.

All is fair in love and opera productions but it does no harm to recall that The Magic Flute is a play with songs written for the popular theatre. Yes, there is a Masonic connection for those who can discern it or care about it but emphasizing the darkness and the progression towards virtue and light in conjunction with generous use of presumably more entertaining puppets takes away from the joy of the opera that is not lifted by those ubiquitous puppets. 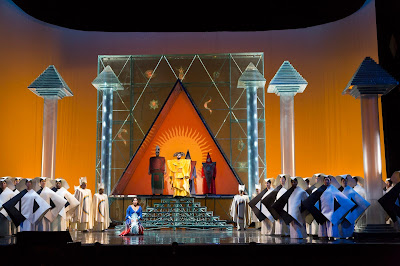 A scene from  Mozart's "Die Zauberflöte." Photo: Richard Termine/Metropolitan Opera
The makeup is something else. Tamino and Pamina are about the only ones who have not been painted over as if they are from another dimension.

The underlying ideas of living for love, rejecting hatred and vengeance, espousing high morals and the idea of forgiveness are not virtues monopolized by the Masons. The people who first saw the play with songs on September 30, 1791 in the Theater auf der Wieden in suburban Vienna probably got all the virtues that are promulgated and all the low humour and enjoyed the songs.

If the use of puppets is intended to attract and entertain children, why is the production sung in German? How many children (and adults) can enjoy the low comedy while trying to read the subtitles? Even if you know the opera well, humour in subtitles does not come out well. There is no reason for The Magic Flute to be done in German except snobbery.

Tenor Charles Castronovo is the romantic (love at first sight of her portrait) prince who is determined to go through fire, water, to keep quiet when told to, and do all to qualify for the title “mensch” and marry Pamina. Castronovo is heroically convincing both vocally and theatrically. Soprano Golda Schultz is the lovely, delicate and patient Pamina who sings beautifully and asserts herself. She deserves Tamino.

Baritone Markus Werba has a comic sense and a superb voice for the bird catcher Papageno but he is hampered by speaking in a foreign language. Taymor treats the would-be Harvey Weinstein Monostatos (Greg Fedderly) like a clown. He has the usual gobs of makeup and his real intentions towards Pamina are underplayed, to put it politely.
_____


The Magic Flute by Wolfgang Amadeus Mozart with libretto by Emanuel Schikaneder was transmitted Live in HD from the Metropolitan Opera on October 14, 2017 at the Cineplex VIP Don Mills Shops at Don Mills, 12 Marie Labatte Road, Toronto Ontario M3C 0H9 and other theatres. Encores will be shown on November 11, 27, 29 and December 10 and 16, 2017 at various theatres. For more information: www.cineplex.com/events
Posted by James Karas at 9:38 AM