Asher Lev is a young man living in Brooklyn who repeatedly reminds us that his name is Asher Lev and that he is a faithful Jew. He feels the need to remind us and himself of that because Asher Lev has an extraordinary gift that some people, especially his parents, consider unJewish. He is a painter.

As a child, Lev paints scenes of the Crucifixion to his mother’s shock. He can paint birds or flowers, she tells him, and reminds him what the Jews have suffered at the hands of the followers of Christ in the last two thousand years.

Thus the battle lines are drawn in this brilliant, moving and highly dramatic play about the need for an artist to express his personal vision of the world and Jewish traditions including piety and respect for one’s parents (honour thy father). 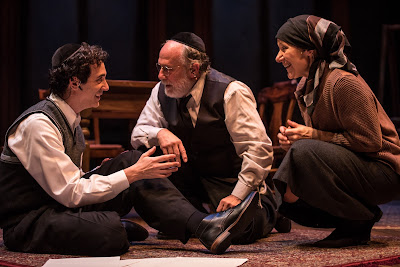 Jonas Chernick, Ron Lea, Sarah Orenstein. Photo Credit: Dahlia Katz
My Name Is Asher Lev is an adaptation by Aaron Posner of Chaim Potok’s novel. Jonas Chernick plays Lev as an almost meek child and young man. His head is usually slightly tilted and he looks downward. He wants to be a good Jew and show respect for his parents but he has a gift, which may be divine or demonic, for painting. The two poles are inimical and he tries desperately to explain his gift and not alienate his parents.

There are a number of other characters in the play with Roan Lea playing all the men and Sarah Orenstein playing all the women. Lea gives superb performances as Asher’s father, uncle, the artist Kahn and the Rabbi. All of these people are intelligent, perceptive and hold defensible positions. The father is highly educated and spends much time in Europe establishing yeshivas. He no tyrannical father of fiction. It is difficult to bridge the gap between educating the young to be good Jews and having a son painting the Crucifixion.

Asher’s uncle is open-minded and admires the youngster’s work. Kahn is a free-spirited Jew who admires genius and mentors Asher. The Rabbi shows deep understanding of Asher’s conflict.

Sarah Orenstein is the eternal mother who loves, cares and is in the middle of a father-son conflict. We see Orenstein as a savvy gallery owner who has nothing in common with the mother. Wonderful acting.

The brilliant discussion of the play about art and faith are utterly absorbing because they involve a community of traditions and faith on one hand and the individual who cannot comply with those demands completely. The supreme moment of the play I think comes when Asher sees Michelangelo’s Pietà in St. Peter’s Basilica. It is an expression in marble of indescribable pain and serenity as the Virgin Mary hold her son’s body after he is taken down from the cross. Asher is overwhelmed because he does not see any doctrine or religion but only supreme art. It is a compelling moment for Asher the artist and for the audience watching the play.

Director Joel Greenberg handles the play with a sure and delicate touch. There is considerable wit in the play as well but for some reason the audience underreacted to it on the night that I saw it.

The set by Brandon Kleiman consists of an ordinary room in 1950’s Brooklyn that serves as the house of the Levs, an art gallery and Kahn’s studio with minor touches.

My Name Is Asher Lev by Aaron Posner in a coproduction by the Harold Green Jewish Theatre Company and Studio 180 Theatre continues until November 26, 2017 at the Greenwin Theatre, Toronto Centre for the Arts, 5040 Yonge St, North York, ON M2N 6R8. www.hgjewishtheatre.com