ROMÉO ET JULIETTE – REVIEW OF LIVE FROM THE MET PRODUCTION

The Metropolitan Opera is treating its world-wide audience in movie theatres with a new production of Roméo et Juliette directed by Bartlett Sher.

There are a number of things that did not fare well as they travelled from New York to us who sat in movie houses but the most important aspects of the production did. That is the singing from soprano Diana Damrau as Juliet and tenor Vittorio Grigolo as Romeo.

The silken-voiced Damrau makes an outstanding Juliet. She is vivacious, playful, deeply moving and sufficiently young-looking to be convincing. She is perfectly matched with tenor Vittorio Grigolo who displays the same physical attributes of youth and vivacity as her and has that marvelous voice that can scale the octaves with tonal beauty and assurance. 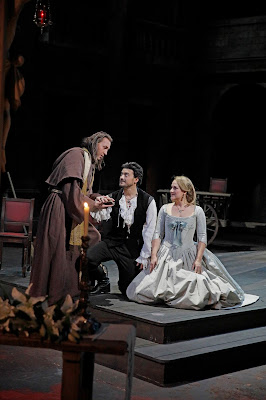 Mikhail Petrenko as Friar Laurence, Vittorio Grigolo as Roméo, and Diana Damrau as Juliette in Gounod's Roméo et Juliette. Photo by Ken Howard/Metropolitan Opera.
In their duets and solo arias we see their ardour, their enthusiasm and, in the end, their tragedy with pleasure and tears.

This is a new production for the Met directed by Sher who is a man of the theatre with considerable experience in staging operas. He sets the opera in the 18th century. The ruffles, three-cornered hats, wigs for the men of rank, elegant gowns for the women bespeak a high society of wealth and class. All designed by Catherine Zuber.

The set designed by Michael Yeargan features the exterior/interior of an impressive three-story palazzo with monumental columns, balconies and large windows. It serves as the background for the entire performance. Before Juliet visits Friar Lawrence, he appears on stage dragging a cart and he sets up his chapel on a raised part of the stage. For the final scene in the crypt some large stands are placed on the stage on one of which Romeo and Juliet will act out their final tragic scene.

There is nothing wrong with this. Shakespeare’s Globe Theatre in London performs plays on the same background with necessary props being brought in. The issue was that we in the movie theatre could hardly see the background much of the time. Everything happens during the night in the opera, it seems, and the lighting for the broadcast is simply inadequate. The audience in Lincoln Center may have seen something different than the rest of us but one cannot be sure. 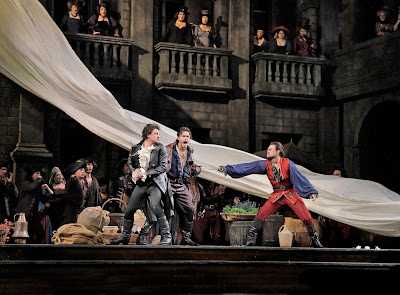 Vittorio Grigolo as Roméo and Elliot Madore as Mercutio in Gounod's Roméo et Juliette.
Photo by Ken Howard/Metropolitan Opera.
The main problem, as always it seems, in watching Live from the Met, is cinema director Gary Halvorson. Sher wants the production to be paced briskly and energetically. Good choice but with Halvorson changing camera shots as if he were playing a video game, brisk becomes frenetic and close-ups become embarrassing. If you do not want to see Grigolo’s larynx, close your eyes. Halvosron, sees nothing wrong with giving us a close-up of Damrau or Grigolo that covers the almost entire screen. The singing and the acting take place in context but that fact seems to have escaped Halvosron. He shows random and unbelievably numerous shots like a child with ADD. That is my rant about him for the day.

This production is new for the Met but it is in fact a La Scala production that was initially seen in Salzburg in 2008. A DVD of a live performance with Rolando Villazon as Romeo and Nino Machaidze as Juliet is available from Deutsche Grammophon. There is superlative singing and orchestral playing under the baton of Yannick Nézet-Seguin but the interesting point for this review is the handling of the recording by Brian Large. You can judge what a sensible director does with changing shots as compared to the unbearable treatment from Halvosron.
________

Roméo et Juliette by Charles Gounod will be broadcast again at various theatres on February 27 and March 1, 2017. For information about future broadcasts visit www.metopera.org/hdlive or www.cineplex.com.
Posted by James Karas at 10:51 AM