If you meet a Hedda Gabler as played by Ruth Wilson run as fast and as hard as you can no matter how tempted you are to stop and spend some time with her. Remember what Odysseus had to do to escape the beautiful Sirens with the long hair and lovely voices. His men’s ears were filled with wax so that they would not hear them and he was tied to a mast to make sure he stayed put. He got away and he was tempted with only physical and vocal beauty. If you do not run, you will probably be tempted with raw sexual magnetism and end up in Hades.

Where can you go to escape such a fate? The best place is the National Theatre in London to see the current production of Ibsen’s Hedda Gabler. You will meet a woman who is conniving, bitchy, treacherous, sexually magnetic and lusts for the domination of men. In fact men get some very bad press in the play because all of them are the victims of women. 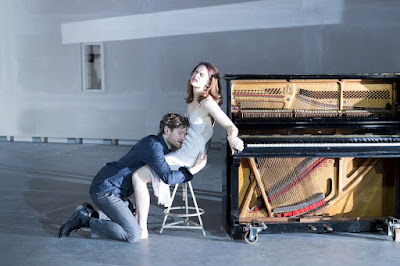 
Director Ivo van Hove and Set and Lighting Designer Jan Versweyveld have the play done on a virtually empty stage without even doors for the characters to enter and exit. They get off the stage using steps leading to the auditorium. The walls are taped but not painted and there are a few scarps of furniture such as a piano, a couch and some flowers in the first act. That is all, except for a fire centre stage which is mandated by the plot. The costumes are modern.

Hedda’s husband Tesman (Kyle Soller) is frequently portrayed as a dry academic who bores his gorgeous new wife and no one can figure out why she married him. Soller’s Tesman is young, athletic, vigorous, ambitious and no push over. A very intelligent interpretation of the role. He could be a worthy husband and opponent, if necessary, for Hedda but she tires of him quickly and goes after the other men in the play. Judge Brack (Rafe Spall) was no fool to want to marry her. She exercised power over Lovborg but when he tried to impose himself, she dumped him.  Lovborg (Chukwudi Iwuji) is a brilliant writer who degenerated into alcoholism and destroyed his career but he is on the rebound. 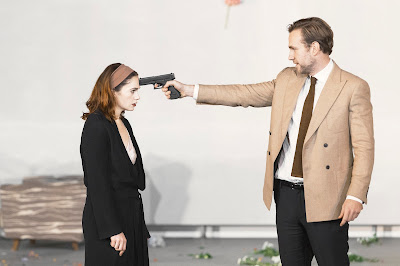 Ruth Wilson (Hedda Gabler), Rafe Spall (Brack). Photo: Jan Versweyveld
After Hedda, Mrs. Elvstad (Sinead Matthews) entered Lovborg’s life and gained dominance over him. Hedda wants to destroy that relationship. When Lovborg loses the only manuscript of his new book and wants to commit suicide, she hands him a gun and commands him to do it beautifully. She believes in some kind of amoral, bacchanalian freedom where she must dominate or destroy everyone who stands in her way.

Ruth Wilson is a Hedda for the books. Her Hedda is sexually irresistible, emotionally conniving, intellectually cunning and usually able to get her way. There are few actresses that can combine all these characteristics of this odious woman.

The rational and conniving Brack figures her out and wants to have the upper hand in an affair with her. In a scene of extraordinary emotional power he throws her to the floor and gains absolute supremacy. I will not spoil the effect by giving you more details but if you see this production, it will stay with you forever.
_____
Hedda Gabler by Henrik Ibsen in a new version by Patrick Marber continues until March 21, 2017 at the Lyttleton Stage, Nation Theatre, South Bank, London, England. www.nationaltheatre.org.uk. The production will be broadcast in movie theatres on March 9  and April 1, 2017. Go www.cineplex.com/Events/ for details.
Posted by James Karas at 10:27 AM