Playwright Nick Payne in Constellations asks the big question: what if there are many universes?

If you area like me and have difficulty understanding a single universe, the idea of many of them existing simultaneously is pretty daunting and mind-expanding. And if that is not enough, just imagine us existing in a number of universes at the same time. 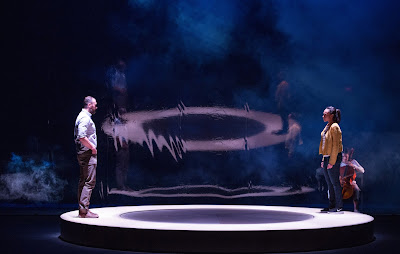 Cara Ricketts and Graham Cuthbertson. Photo: Cylla von Tiedemann
Roland (Graham Cuthbertson) and Marianne (Cara Ricketts) are ordinary people whom we meet in “our” universe. He is a beehive keeper and she is a physicist who works at Cambridge. They meet at a barbecue party but their attraction to each other is cut short because his wife is there.

That meeting is replayed a number of times with certain permutations. Do they exist in different universes simultaneously but their lives differ in certain details?

Roland and Marianne will go through courtship, love, fidelity and infidelity, together and apart, illness and health and I suppose all the natural shocks that flesh is heir to. But those experiences are never the same. The play is based on themes and variations and as in a musical composition the fascination lies in the inventiveness of the composer but in this case it is on a multiversal level. 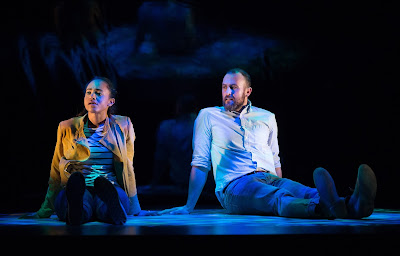 Cara Ricketts and Graham Cuthbertson. Photo: Cylla von Tiedemann
Cuthbertson and Rickets are on stage for all of the play’s 75 minutes and they have to deal with the big and small variations of the text with finesse and precision made more difficult by the fact that the text is identical or similar in each universe. They perform with expertise and true talent.

There is a cellist (Jane Chan) on stage throughout the performance providing an obbligato to the numerous lives of Roland and Marianne.

The set by Michael Gianfrancesco consists of a revolving circular platform which is mirrored behind the performers. There is a circular crown above. The world or universe or multiverse goes around in mysterious ways that is out of the scope of comprehension of most of us.

Peter Hinton directs the actors superbly though all the repetitions, variations and emotional upheavals in a play that can only be described as being out of this world.