Come From Away is a hit.

Moving quickly away from that hackneyed phrase, Come From Away is a musical now playing at the Royal Alexandra Theatre and it has all the ingredients that make a successful musical and some additional elements that make it a joy to watch.

Come From Away is an illustration and celebration of spontaneous humanity and decency on a large scale. It does not shy away from our baser instincts of fear and racism but it shows humankind at its best. And it is based on facts.

Some background. All of us recall that on September 11, 2001 terrorists flew two airplanes into the twin towers of New York’s World Trade Centre. All airplanes headed for the United States were ordered to land outside the U.S. Thirty eight planes landed in the small town of Gander, Newfoundland bringing about 7000 people and in effect doubling the local population. How do you provide accommodation, food and comfort for that many people who drop in from the sky, completely unexpectedly? 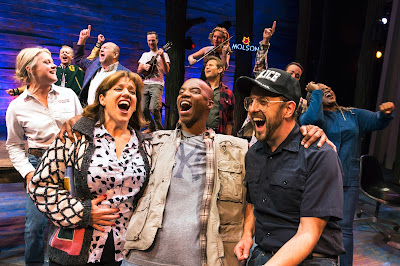 Come From Away Photo Credit: Matthew Murphy
Irene Sankoff and David Hein interviewed some of the visitors and hosts and combined their stories with marvelous music and songs to create this robust and supremely entertaining musical, nay, celebration.

A cast of twelve actors/singers represent dozen of characters in quick succession as we start with a glimpse of life in the town before the visitors arrive – “Welcome to the Rock.” Then there is general mobilization (“38 Planes,” “Blankets and Bedding”) as the townspeople get into action to provide for the strangers at their door. There is a variety of them from the airplane crews to business people to Muslims, an Afro-American, and a gay couple. The town people are humane, charming and frequently funny.

The whole cast is on stage much of the time in an ensemble performance where there is almost no solo number. The music performed by an onstage band is vigorous, often foot-stomping and delightful.

There are numerous episodes culled from the four days’ stay that range from the humorous, to the touching, to the tragic. All the actors deserve unstinting praise but I will mention only a few. Joel Hatch plays, among other parts, Claude the Mayor who is decent and funny. Petrina Bromley plays Bonnie of the SPCA who must take care of the animals including the birth of a monkey and the manners of a feces-tossing member of that species. And there is Janice (Kendra Kassebaum) the TV reporter on her first day on the job!

Rodney Hicks plays a black American who expects to be robbed any minute as he accepts hospitality with some trepidation. Oz, the town constable, (Geno Carr) gives speeders a warnings with an expletive. The gay couple finds a tolerant society but the Muslim is not treated as kindly in the atmosphere of fear. 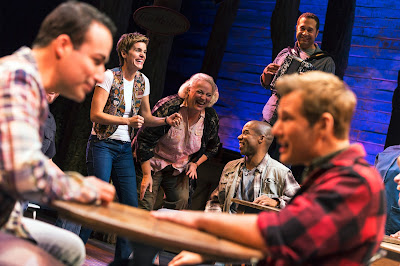 Come From Away Photo Credit: Matthew Murphy
I give the names of the superb cast with the main role as listed in the program:  Petrina Bromley as Bonnie, Geno Carr as Oz, Jenn Colella as Beverley, Joel Hatch as Claude, Rodney Hicks as Bob, Kendra Kassebaum as Janice, Chad Kimball as Garth, Lee MacDougall as Doug, Caesar Samayda as Ali, Q. Smith as Hannah, Astrid van Wieren as Beulah and Sharon Wheatley as Diane.

Director Christopher Ashley maintains a brisk pace with the merry-go-round of characters and episodes. The revolving set by Beowulf Boritt helps on a single paneled set that gives the impression of small town once you know that you are in a small town in a corner of Canada. It works.